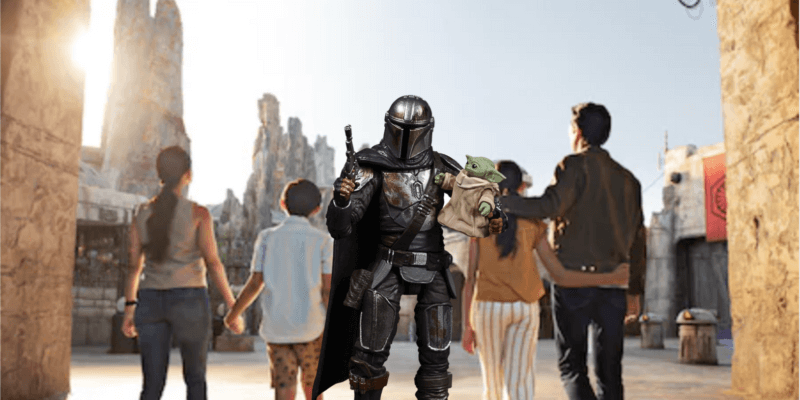 If you’re a Star Wars fan, it’s almost inevitable that you love The Mandalorian.

Grogu (AKA The Child AKA Baby Yoda) and Din Djarin (Pedro Pascal) captured the Star Wars fandom’s collective imagination from the day The Mandalorian Season 1 premiered on November 12, 2019.

Now, it seems that The Mandalorian might be coming to life on more than just the small screen via the Disney+ streaming platform. One podcaster — Jim Hill of the Disney Dish podcast — recently reported a new rumor that Mandalorian characters could be coming to Star Wars: Galaxy’s Edge!

The 14-acre Star Wars-themed land can be found at both Disneyland Park at Disneyland Resort in Anaheim, California and Disney’s Hollywood Studios Park at Walt Disney World Resort in Orlando, Florida. Although the Disneyland version remains closed pending Disneyland Resort’s reopening following its pandemic-related closure, Disney World’s version of Galaxy’s Edge has been open — at limited capacity and with a variety of health and safety protocols — since July.

Collider shared these details about Disney Dish’s assertion that Mandalorian characters could soon be coming to Star Wars: Galaxy’s Edge:

Hill states that The Mandalorian, The Child, and characters like Boba Fett and Bo Katan, could soon make appearances at Black Spire Outpost on the planet of Batuu (a new chunk of Star Wars mythology invented by Lucasfilm and Walt Disney Imagineering specifically for the parks). He even suggests that Kylo Ren’s ship (a leftover design from Colin Trevorrow’s version of Episode IX) could be swapped out for a full-size version of the Razor Crest, the Mandalorian’s signature ship (that, spoilers, was destroyed midway through Season 2).

However, it is possible that Disney could disregard the canon timeline in favor of fan service. The Mandalorian is indisputably the company’s most popular Disney+ original series right now and viewers would undoubtedly love to take their own photos with Djarin’s popular ex-Imperial cruiser.

In terms of character appearances, Mandalorian title character, Din Djarin himself, could certainly be alive during the sequel trilogy era — he would be significantly older than he is in The Mandalorian, of course, but as long as he was wearing his full Mandalorian armor and beskar helmet, that wouldn’t make much of a difference from a character meet and greet standpoint.

Something would, of course, have to be done about the version of Djarin’s Mandalorian helmet that currently hangs at Dok Ondar’s Den of Antiquities.

There was a rumor that circulated the web last year asserting that a Din Djarin meet and greet was coming to the parks in the future. However, Disney quickly shared that this wasn’t true, and, as we know, no such thing has come to fruition. However, if this is something Disney Parks are planning for the future, here’s why it might make sense.

Collider made an excellent point about how the introduction of fan-favorite Mandalorian characters could enhance the overall Galaxy’s Edge experience for Guests visiting the Outer Rim planet:

…one of the promised features of Galaxy’s Edge that we’re all still waiting for was the presence of assorted aliens, bounty hunters, and droids, who would interact and mingle with guests, taking note of your adventures in the land (the idea that a “reputation” would follow you around the area of the park is tantalizing and as-yet-unrealized). Perhaps the presence of these new, more familiar characters could also lead management to prioritize some kind of live stunt show in Galaxy’s Edge

There is already a Galaxy’s Edge Magic Shot involving Grogu in his pod — and plenty of Grogu merchandise available at Blackspire Outpost — so adding more theming featuring the adorable foundling isn’t farfetched.

New, familiar, relevant characters joining Chewbacca, Vi Moradi, and Rey would go a long way toward helping every Star Wars fan — old and new — find their own place in the Galaxy’s Edge story.

It’s also possible that Mandalorian characters could somehow be worked into the storyline of the upcoming Star Wars: Galactic Starcruiser hotel. Although no official opening date has been announced, we know that Guests onboard the Halcyon will get to meet characters and ride both Millennium Falcon: Smugglers Run and Star Wars: Rise of the Resistance.

Plus, just imagine a Darksaber being added to the standard lightsaber or legacy lightsaber options at Savi’s Workshop!

The Star Wars sequel trilogy was not exactly received by the Star Wars fan community with open arms. Rian Johnson’s The Last Jedi faced particular wrath, with one Star Wars writer already attempting to retcon it in order to “fix” the ending of the Skywalker Saga in The Rise of Skywalker.

Adding Mandalorian characters, motifs, and ships to Galaxy’s Edge is one way Disney could attempt to erase the events of the sequel trilogy, at least to some degree — this is something they are rumored to be trying to do with upcoming Mandalorian spinoffs like Ahsoka, Rangers of the New Republic, and The Book of Boba Fett.

Only time will tell if Disney and Lucasfilm bring the cast of The Mandalorian to life at Star Wars: Galaxy’s Edge anytime soon, but it certainly seems plausible.

Stay tuned to Inside the Magic for the latest Disney Parks and Star Wars news.

What do you think? Would you like to see Grogu and Din Djarin walking around Galaxy’s Edge?