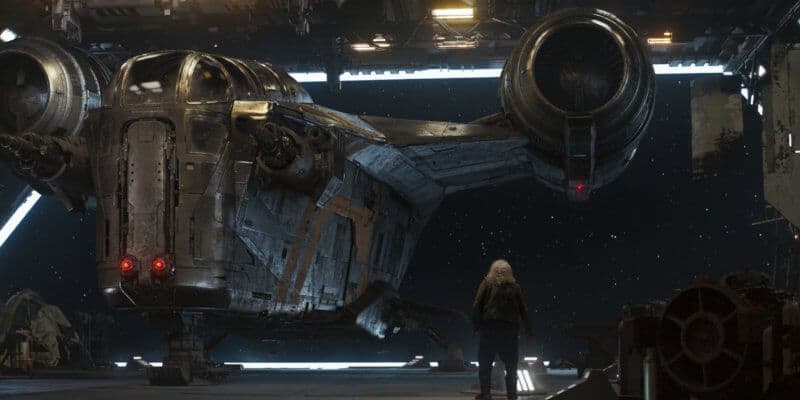 When we first saw Din Djarin’s (Pedro Pascal) Razor Crest ship in Season 1 of The Mandalorian, it’s already a little beat up and, quite frankly, giving the Millennium Falcon a run for its money in regard to how many repairs it needs.

Then, in Season 2, the ship really didn’t have a chance to make it out alive — first, it was attacked by Krykna spiders on Maldo Kreis, then it had a very unfortunate water landing, and, finally, it was completely obliterated by a single strike from Moff Gideon’s (Giancarlo Esposito) Imperial cruiser.

Through all of this, many Star Wars fans didn’t even realize how attached we were to the ship until it was gone. Now, it seems that, just maybe, there’s a reason we felt an emotional attachment to Djarin’s transport — and it goes beyond all the memories of Grogu (AKA The Child AKA Baby Yoda) and his little silver ball.

Could we have actually seen the Razor Crest before, in animated form? Inverse shares details about this theory, which began with a TikTok video uploaded by Anthony Venuti:

…[he argues] that the Razor Crest actually shows up in one episode of the animated series The Clone Wars. The episode in question, Season 2 Episode 17, is titled “Bounty Hunters”…

…”Bounty Hunters” follows Obi-Wan Kenobi, Anakin Skywalker, and Ahsoka Tano as they wind up on a far-flung planet that’s being terrorized by space pirates…After a brief misunderstanding, the two groups [Kenobi, Skywalker, Tano and a group of non-Mandalorian bounty hunters] end up working together in what feels like a pretty non-essential episode of The Clone Wars.

However, the important moment comes at the very end when one of the bounty hunters, Sugi, offers to give the Jedi a ride home in her ship. As the episode ends, we see her ship. And it looks a lot like the Razor Crest.

As we can see from this photo [below] of the Hasbro Star Wars Vintage Collection Razor Crest model, the two ships do have some differences — namely, the windshields have different designs and the Razor Crest has two guns on the front that clearly aren’t part of Sugi’s ship in Clone Wars.

Both of these changes, of course, could have been made in the intervening years between Star Wars: The Clone Wars — set between prequel trilogy films Star Wars: Episode II – The Attack of the Clones (2002) and Star Wars: Episode III – The Revenge of the Sith (2005), and the events of The Mandalorian — set about five years after the defeat of the Empire in Star Wars: Episode VI – The Return of the Jedi (1983). However, it does seem unlikely that they are exactly the same ship.

At the very least, this clear visual connection feels like a deliberate nod to Star Wars past from The Mandalorian. And considering that the show’s co-creator Dave Filoni also worked with George Lucas on The Clone Wars, we doubt it’s just a coincidence.

Even if Clone Wars didn’t introduce us to the Razor Crest, it undoubtedly showed fans a similar starship model — which may explain the instant, sub-conscious connection many of us felt to Djarin’s ship from the time The Mandalorian premiered.

If the Clone Wars ship is actually the Razor Crest, however, it is intriguing that it previously belonged to another bounty hunter. We know little about the history of the former Imperial gunship — only that it somehow fell into Djarin’s hands in the early days of the New Republic.

Moving forward, it is unknown what ship our beskar armor-wearing hero, Din Djarin, will fly. The Mandalorian Season 3, though confirmed, has no official release date and is missing from Disney’s 2021 release schedule.

Two of the hit series’ spinoffs — Ahsoka and Rangers of the New Republic — are also conspicuously absent from 2021’s release dates. The Book of Boba Fett, starring Temuera Morrison as the iconic bounty hunter and Ming-Na Wen as Fennec Shand, is set to hit Disney+ in December 2021.

What are your thoughts on whether or not Sugi’s ship is actually supposed to be the Razor Crest?