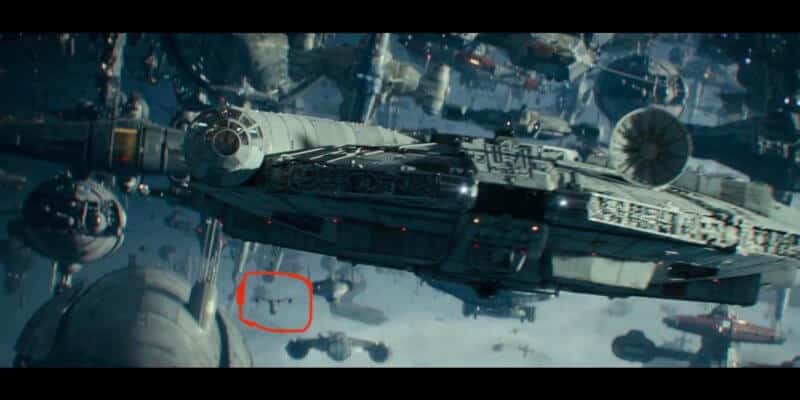 In last week’s episode of The Mandalorian — Season 2, Episode 6 (Chapter 14: The Tragedy) — a number of, unsurprisingly, tragic events took place.

Other than Grogu (AKA “The Child” AKA “Baby Yoda”) being stolen by Moff Gideon’s dark troopers, the saddest moment of this Mandalorian installment was the destruction of the Razor Crest, the ship that has journeyed with us on all of our adventures with Din Djarin (Pedro Pascal) and his tiny green foundling so far.

The Razor Crest’s recent newsworthiness has caused some Star Wars fans to wonder if it may come back — we’re not entirely certain how they think this might happen after it was literally obliterated, but hey, stranger things have happened in a galaxy far, far away — because they think they remember seeing it in Star Wars: Episode IX – The Rise of Skywalker (2019).

It’s true that there are numerous ‘Easter eggs’ for Star Wars fans in the “ship scene” — Lando Calrissian (Billy Dee Williams) appears in the Millennium Falcon and Hera Syndulla’s Ghost from the animated Star Wars Rebels series shows-up, for example — but it appears that the actual Razor Crest is not included in the fleet.

Martin confirmed that the ship “Sure looks like” the same model as the Razor Crest, but it seems that Djarin’s ship is actually gone for good. Keep in mind that Rise of Skywalker takes place well after the events of The Mandalorian, which is set approximately five years after Star Wars: Episode VI – The Return of the Jedi (1983).

What do you think will happen next in The Mandalorian? Will Din Djarin ultimately end up owning Boba Fett’s Slave I?