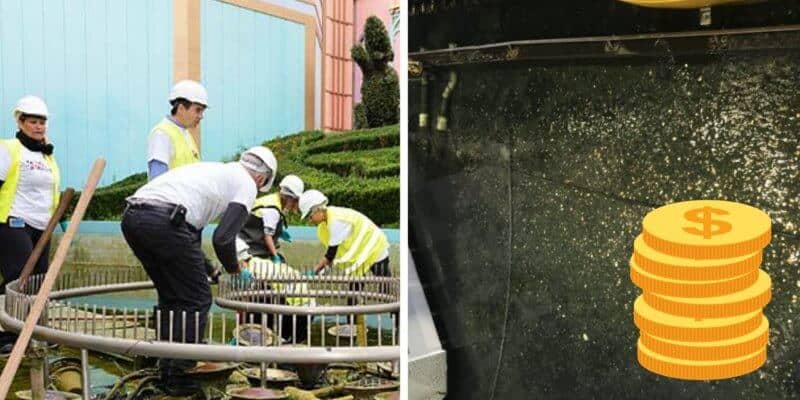 Whenever a Disney World Guest is the the queue for “it’s a small world” for the first time, there is one thought that runs through their head, “How much money is in that water and where does it go?”.

Throwing coins in fountains or wells is something people do all over the world, and it stems back many years! Interestingly enough, the origin of this action comes from people having believed that water had healing powers, and by throwing in coins to a well, they were thanking the gods for the power the water held. Disney water, on the other hand, might be magical and smell like something we can make candles out of, but the money is going somewhere else.

Disney Guests throw coins into Cinderella’s Wishing Well at Magic Kingdom — and any water rides or fountains on property,. You may have noticed, but the floors of the fountains are usually flooded with silver. Each year, Disney actually makes a point to collect all the money found in their theme parks’ water features. They have to do this often to make sure the coins do not erode and, therefore, still hold their value. It’s a good thing, too, because there are thousands of dollars found at the bottom of all of the water features at Disney World!

We recently reported that in 2020, even with the parks having been closed for a chunk of it, Disney Guests were able to technically donate $20,000 this Thanksgiving which went to the Coalition for the Homeless of Central. Disney actually always donates to that Coalition for the Homeless of Central every year with the money collected, so the next time you are making a wish, you can rest assured knowing that you’re wish is going to turn into something more for someone in need.

In previous years, the money found on the floor has gone to other non-profit organizations, but it seems that $20,000 is on the higher end of what is typically found. This is pretty remarkable considering the parks were closed for a few months this year. All I know is that I do not envy the person who has to count all of the coins to get to that total!

Are coins the only thing people leave behind at Disney World?

Although you may find coins lying everywhere, some Guests like to leave behind a little something extra when they are on an attraction. If you head on Expedition Everest at Animal Kingdom, right before you head backward to the Yeti, you may notice a plethora of hair ties on the rock work. There is no reason for Guests to do this, but I think it’s become a thing that has been done for so long now that it is tradition.

The Haunted Mansion at Magic Kingdom often gets a scary surprise as well. Many Guests try to dump the ashes of their loved ones in the attraction when they ride. This is 100% not allowed, and be warned that if you ever try to do this, Disney Cast Members are watching Guests every moment as they ride on the attraction. You will not only be in a lot of trouble if you try this, but you will also end up having those ashes swept up, which is likely not the final resting place anyone would really want.

What other objects have you noticed to be left behind at Walt Disney World?