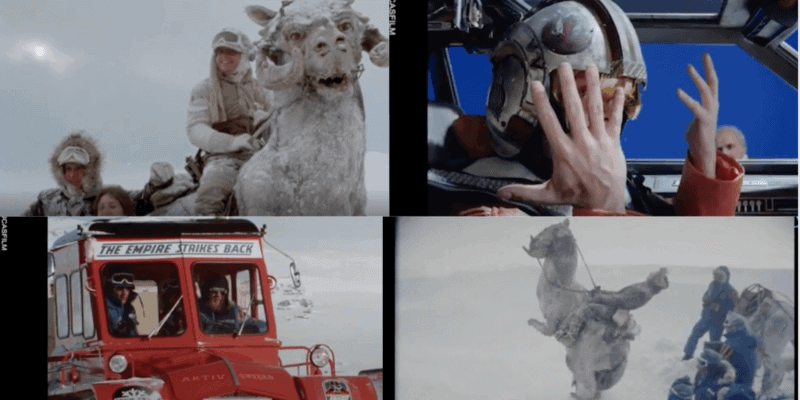 The footage, although hilarious, is also poignant because it features Carrie Fisher (Princess Leia) and Peter Mayhew (Chewbacca), both of whom are now deceased.

Director Irvin Kershner — who originally turned down George Lucas when he asked him to oversee the Star Wars: A New Hope sequel — also appears in the footage. Kershner passed away in 2010.

Joonas Suotamo has taken over the role of Chewbacca in Star Wars movies and television shows, but Leia Organa was written out of the series in the final film of the Skywalker Saga — Star Wars: Episode IX – The Rise of Skywalker.

EXCLUSIVE: I’m excited to share rare & never-seen footage, outtakes & bloopers from #StarWars “The Empire Strikes Back”! Amazing moments with Harrison & Carrie, plus @HamillHimself's "Tauntaun Dance". A gift to you from my favorite Lucasfilm elves. #ESB40 https://t.co/3Rfe1qyr2i

EXCLUSIVE: I’m excited to share rare & never-seen footage, outtakes & bloopers from #StarWars “The Empire Strikes Back”! Amazing moments with Harrison & Carrie, plus @HamillHimself‘s “Tauntaun Dance”. A gift to you from my favorite Lucasfilm elves. #ESB40

2020 marks the 40th Anniversary of Empire Strikes Back. Due to the ongoing COVID-19 pandemic, many planned events, such as those at Star Wars Celebration, had to be canceled.

For fans of the movie — which many regard as the best in the entire Skywalker Saga — this is a fun way to enjoy four decades of ESB (and Lando Calrissian) without leaving home.

Wikipedia shares these details about the cultural significance of Star Wars: The Empire Strikes Back:

The Empire Strikes Back premiered at the Kennedy Center in Washington, D.C. on May 17, 1980, and was released in the United States on May 21, 1980. The film became the highest-grossing film of 1980 with $440 million. Despite being initially met with mixed critical reviews, it is now hailed as the best film in the Star Wars saga and one of the greatest films ever made. The film has grossed over $550 million worldwide from its original run and several rereleases. Adjusted for inflation, it is the second-highest-grossing sequel of all time and the thirteenth highest-grossing film of all time in North America.[5] In 2010, the film was selected for preservation in the United States’ National Film Registry by the Library of Congress as “culturally, historically, or aesthetically significant”.[6][7]

The Empire Strikes Back had a significant impact on filmmaking and popular culture, being regarded as a rare example of a sequel that transcends the original. The climax, in which Vader reveals to Luke that he is his father, is often cited as one of the greatest plot twists in film history. The Empire Strikes Back was followed by Return of the Jedi in 1983. The two films, alongside the original Star Wars, comprise the original Star Wars trilogy.

What do you think about this never-before-seen ESB footage?