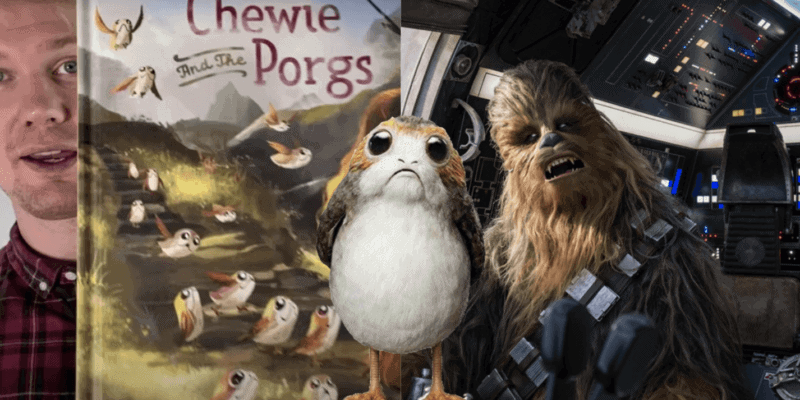 If you’ve watched the Star Wars sequel series, you know Ahch-To is the planet where heroine, Rey, travels to find the reclusive Luke Skywalker. Covered largely in water, Ahch-To is home to numerous rocky islands that are populated mainly by local wildlife and female Lanai who serve as Caretakers.

When Rey arrives, one of the first species she meets is the porgs. These adorable, non-sentient birds are characterized by their huge eyes and flat, beakless faces.

In Star Wars: Episode VIII – The Last Jedi, Chewbacca roasts a porg (although the jury is still out on whether or not he actually eats it). Now, a charming Star Wars children’s book entitled “Chewie and the Porgs” tells the tale of how the Millennium Falcon’s Wookiee pilot comes to love some of Ahch-To’s tiniest residents.

“Chewie and the Porgs” was written by Kevin Schinick and beautifully illustrated by Fiona Hseih. The video read-a-long of this Star Wars kids’ story is done by Finnish actor, Joonas Suotamo, who took over for Peter Mayhew as the voice of Chewbacca.

In addition to hearing this Star Wars children’s book read aloud, parents and kids can enjoy a fun activity that goes along with the “Chewie and the Porgs” storyline. Below, find the instructions for how to paint porg rocks you can hide in your backyard for a scavenger hunt! It’s the next best thing to Galaxy’s Edge.

“Chewie and the Porgs” Painted Rocks (Courtesy of Star Wars)

Step 1: Begin by washing the rocks and letting them dry completely.

Step 2: While the rocks dry, look through the picture book and pick your favorite expressions for both Chewbacca and the porgs to use as inspiration — or think of your own!

Step 3: Next, paint one rock completely brown for Chewbacca, and the other brown on the sides for the porg. Paint a curved, v-shaped point on the top of the porg rock. Set aside Chewbacca for now.

Step 4: Paint the middle of the porg rock with white paint and let dry.

Step 5: Next, use the black paint to make the porg’s big round eyes, smile or frown, and nose.

Step 6: Once the black paint is dry, use the white paint to make the reflections in the porg’s eyes.

Step 7: Finally, mix together the black and white paint to make grey, and add feathers to the porg’s belly.

Step 9: Now that Chewbacca is dry, use the white paint to make two half-circles for Chewie’s eyes at the top of the rock.

Step 10: Paint a small black oval for his nose and use the pink paint for his mouth.

Step 11: Use the blue paint to create Chewie’s irises, and then the black paint for the pupils.

Step 12: Paint a small oval of grey paint on the nose.

Step 13: Finally, use the black paint to draw Chewbacca’s fur. Have fun with your new Star Wars rock pets!

Are you going to try this Star Wars family activity and story with your family soon? We’re obsessed with how cute this at-home Disney Star Wars themed craft is!

What’s Up Next For Star Wars?

Are you going to try this Star Wars family activity and story with your family soon? We’re obsessed with how cute this at-home Disney Star Wars themed craft is!

Although the next Star Wars movie isn’t expected until 2022, there are lots of things coming down the pipeline for Star Wars fans. The Skywalker saga may have come to an end, but this year’s Star Wars Day will be a special one for those who love Star Wars.

Disney+ is getting in on the fun with two exciting releases. Disney Gallery: The Mandalorian will take fans behind-the-scenes of the hit show, while the series finale of Star Wars: The Clone Wars will also air.

Furthermore, as soon as the Disney Parks reopen, fans can once again experience the magic of Batuu at both Disney’s Hollywood Studios in Orlando and Disneyland Park in California.