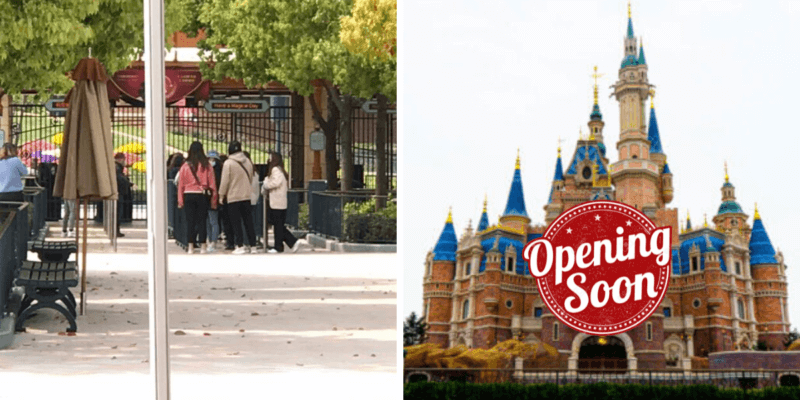 Every Disney theme park around the world is currently closed, and their strategies for handling reopening to prevent the spread of the current pandemic remain rather unclear.

But as each resort attempts to discover the best method for their situation, Shanghai Disney Resort seems to have taken a more personal approach. And it appears they are preparing for an almost-imminent reopening.

A recent tweet that shows people gathering at the entrance to Shanghai Disney Resort. They are apparently standing in as fake guests helping Disney’s only resort on Mainland China test reopening. And if this is a simulated reopening, it is not the first time Shanghai Disney has attempted this method.

One could argue that this is the most practical approach to reopening. While Disney execs like Bob Iger and Josh D’Amaro join state-level task forces designed to reopen economies as well as the theme parks, Shanghai’s approach brings the human element into the equation. When it comes down to the real reopening day, how are people truly going to react? Many Disney fans will probably look on in jealousy for these people who get to enter the parks and just ask themselves, “Where do I sign up?”

It also appears that Shanghai Disney Resort has now installed markers on the ground to direct people to abide by a certain social distancing standard.

These markers and these “fake guests” are only the latest development to come out of Shanghai Disneyland. They had already announced the intention to use personal QR codes and mandatory temperature screenings to ensure the utmost safety of their guests and Cast Members.

Related: How Shanghai Disney’s Temperature Screening Could Be Implemented at U.S. Disney Parks

Shanghai Disney Resort is the newest addition to Disney’s theme park empire and the first to have temporarily closed due to the current pandemic crisis. Since it initially closed, the resort in Shanghai has made strides to partially reopen some of its areas.

Shanghai Disneyland remains closed as we continue to closely monitor health and safety conditions and follow the direction of government regulators. However, as the first step of a phased reopening, Shanghai Disney Resort will partially resume operations on March 9, 2020 with a limited number of shopping, dining, and recreational experiences available in Disneytown, Wishing Star Park and Shanghai Disneyland Hotel. Each of these resort locations will operate under limited capacity and reduced hours of operation. The Disney Car and Coach Park and the Disneytown Parking Lot will also reopen.

The resort will provide an extensive range of measures, designed to ensure a safe and healthy experience for all guests, Cast Members and Disneytown tenant employees, including strict and comprehensive approaches on sanitization, disinfection and cleanliness. In accordance with relevant regulations, every guest entering Shanghai Disney Resort will be required to undergo temperature screening procedures and present their Shanghai QR Code. Only guests with a green Shanghai QR Code will be allowed to enter the resort. Guests must wear a mask during their entire visit (except when dining), and will also be reminded to maintain respectful social distances at all times while in stores, queues and restaurants.

Please refer to the Shanghai Disney Resort official website and app for the operation hours of Disneytown and Wishing Star Park.

Featuring a storybook castle and “castle park” bigger than any other built by Disney, Shanghai Disneyland also stands out as being the only Disney theme park to not host versions of “it’s a small world,” and Space Mountain. It will soon be the first park to feature a Zootopia-themed land and its Pirates of the Caribbean attraction quickly became the most coveted ride at any resort. Its eye-catching TRON-themed roller coaster will soon have a twin built at the Walt Disney World Resort in Orlando, Florida.

Have you had the chance to visit Shanghai Disneyland? What do you think about these simulated reopenings? Let us know in the comments!