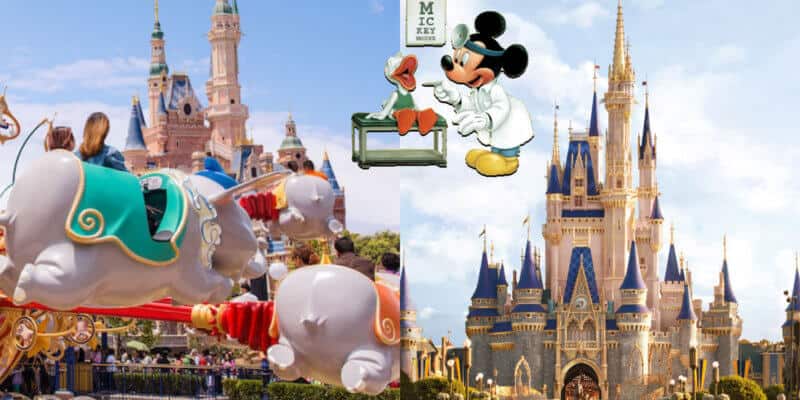 At this time, Shanghai Disneyland Park is currently closed in the wake of the current pandemic. However, as properties around the theme park have recently opened as part of a phased reopening, the resort shares plans of using a QR Code App system to aid in tracking mandatory temperature screenings guests must undertake prior to entrance — a procedure we may begin seeing at the U.S. Disney Parks at both the Walt Disney World and Disneyland Resorts.

In a new release on the Shanghai Disney Resort’s official website, the company reveals they are continuing to “closely monitor health and safety conditions” by following government regulators. And as part of these policies, every guest entering Shanghai Disney Resort will be required to undergo temperature screenings and present their Shanghai QR code.

According to the website, the company states only guests with a green Shanghai QR code will be allowed to enter the resort. Additionally, guests must wear a mask during their entire visit (except when dining) and will be reminded to maintain respectful social distances at all times while in stores, queues, and restaurants.

As we previously shared, Bob Iger, Executive Chairman of the Walt Disney Company, recently revealed the company has considered taking guests’ temperatures prior to admitting them into the theme parks upon their reopening in the U.S. — a procedure which could look similar to the Shanghai Disneyland Resort’s

“Just as we now do bag checks for everybody that goes into our parks, it could be that at some point we add a component of that that takes people’s temperatures, as a for-instance,” said Iger.

He added: “We’re studying very carefully what China has been trying to do in terms of their return to normalcy…And one of the things that’s obvious is they’ve conscripted a large segment of their population to monitor others in terms of their health. You can’t get on a bus or a subway or a train or enter a high-rise building there—and I’m sure this will be the case when their schools reopen—without having your temperature taken.”

At this time, it has not been confirmed whether or not the temperature screenings will be mandated at the U.S. Disney Parks. However, with the large number of guests who enter these magical lands each day, it seems a setup similar to the Shanghai park’s would be most suitable to keep the large flow of people moving into the parks without extreme amounts of delay.

If you’re a frequent Disney Parks visitor, you may be familiar with the bag check lines, which at times can grow to be quite large. If the U.S. parks were to implement this secondary screening, a QR/digital system of some sort might be the best method to keep track of the thousands of people who visit the many parks each day.

It’s true that this secondary screening could add some extra time to a guest’s journey into the parks. Although, in the wake of the current pandemic outbreak, extra precautions have already been taken across the country in the form of stay-at-home orders and mandatory social-distancing measures–all of which, were put in place to help stop the spread of the disease.

When the Disney Parks reopen, it is not known how guests will take to visiting the parks again as the general population has been forced to stay out of population dense areas for quite some time. But, if the parks were to implement a temperature screening or some sort of health screening similar to the Shanghai Disneyland Resort, it could potentially help many find their way back to the magic of the Disney Parks.

In Iger’s original interview discussing the temperature screenings, he also stated the following on the subject: “So we’ve asked ourselves the question, let’s prepare for a world where our customers demand that we scrutinize everybody. Even if it creates a little bit of hardship like it takes a little bit longer for people to get in. Just as the case after 9/11 where people ultimately lived with the notion that in order for them to enter a building, if you’re in an office building you have to show a picture ID or get your picture taken and be screened. Or in order to enter a park, you have to put your bags out there to be checked and you go through some kind of metal detector. Or certainly what’s going on in airports with the TSA.”

What are your thoughts on the Disney Parks in the U.S. implementing temperature screenings similar to the Shanghai Disneyland Resort? Let us know in the comments below!