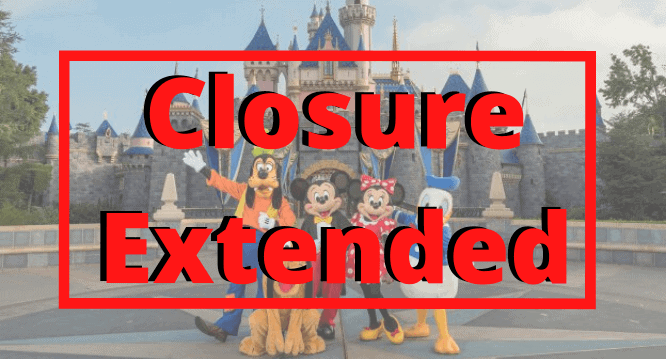 Los Angeles had a new order put down on March 19th, 2020 that will stay in effect until at least April 19, 2020, guiding residents to close all businesses, including museums, malls, retail stores, and workplaces, to stop operations. People will be able to leave home for “essentials” like food,  doctor visits, and a personal walk. With such restrictions being put on residences and business, it was only a matter of time before Disney Parks announced an extended closure of Disneyland Resort Hotels and Parks. Disneyland Resort’s temporary closure will now be extended, and the official reopening date is unknown.

Inside the Magic proposed in a recent article that the Disney Parks would have to extend a closure if they were to abide by the new California Guidelines. It’s good to see that the Walt Disney Company is being extremely cautious when it comes to the health and wellbeing of its guests and Cast Members.  We’re grateful for the care and concern.

The official Disney Parks News announced on their Twitter feed that Disneyland and Disney World will remain closed until further notice. Cast Members will be paid through April 18. The tweet says,

The Walt Disney Company has been paying its cast members since the closure of the parks, and in light of this ongoing and increasingly complex crisis, we have made the decision to extend paying hourly parks and resorts cast members though April 18.

The State of California is under extreme duress with Gov. Gavin Newsom announcing late Thursday, March 19, 2020, for his state residents to “Shelter In Place.” The order came a mere hour after Los Angeles County made the same request.

The orders have become essential for California to bear the heavy burden of Coronavirus sweeping the state. Health officials have confirmed more than 2100 cases of COVID-19 and 27 deaths from the disease as of Tuesday, March 24th, behind Washington state and New York, where more than 25,000 cases have been confirmed.  The California Shelter in Place recommendation means that residents should stay home except to venture out for essential needs (Gas station, Pharmacy, Food, Banks, and laundry services).

The Governor added that California needs another 50,000 beds in order to fight the pandemic, as well as at least a billion gloves and hundreds of millions of gowns, masks and other protective gear. The United States government has stepped in to provide medical support, including,1,000 more beds aboard the ship USNS Mercy, which is headed to Los Angeles on Federal orders.

Orange County, specifically, said it had confirmed 125 cases of Coronavirus since March 23, making a large one-day jump, and having nearly double over the weekend.  The number of cases is expected to grow quickly as more testing is done.

Comments Off on It’s Official: Disneyland Resort to Remain Closed Until Further Notice