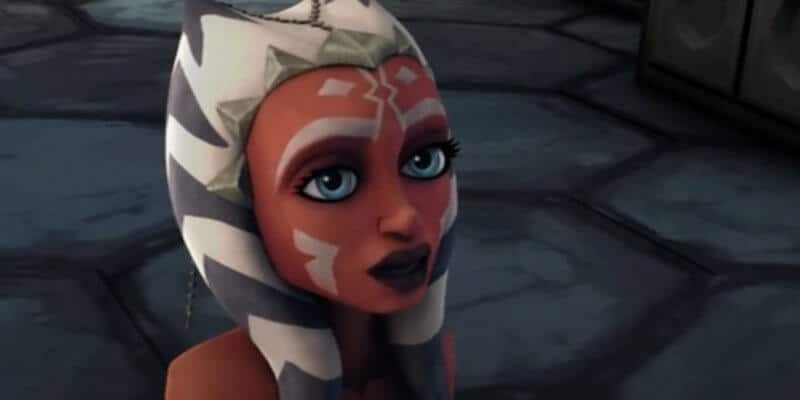 Original voice actress, Ashley Eckstein, has shared fun throwback photos of the letter she received when she was first invited to play Jedi Padawan Ahsoka Tano and of the original Lucasfilm character description.

Eckstein, a favorite within the fan community, surprised a group of Star Wars lovers at a Disney’s Hollywood Studios lightsaber meet-up last fall after Walt Disney World Resort reopened. In her post about getting the part of Ahsoka, she wrote:

I was going through old boxes and I found my original offer letter for the new role of Ahsoka Tano. This was back in 2006 when letters were still sent instead of emails ?

The second slide is the original character description I was given for the first episode. We worked very hard to find Ahsoka’s voice, her spirit, her personality and spunk. It’s one of the greatest honors of my entire life to help originate the role of Ahsoka Tano.

Through the course of the series, Ahsoka will become a [sic] more confident and powerful on her way to becoming a full fledged Jedi. Ahsoka will learn to rely on herself in connection with the force as she becomes a powerful Jedi an strong young woman. Her hero’s journey transformation will be evident in stories focusing on her personal growth through the Jedi Hero lessons.

Some of Ahsoka’s attributes were, “brave & feisty,” “patient & intuitive,” and “opinionated & talkative.” It is noted that she struggled with “insecurity,” at least in her initial form.

At the time this was written, of course, nobody could have known just how popular the Togruta character would become and that we would still be following her story 15 years later.

What’s next for Ahsoka Tano?

Eckstein voiced Anakin Skywalker’s Padawan for all seven seasons of animated series Star Wars: The Clone Wars and again in Star Wars Rebels, which is set well over a decade later in the Star Wars timeline.

The popular voice actress, however, did not get the opportunity to portray the fan-favorite Star Wars character in her live-action debut in The Mandalorian. Instead, the role was given to actress Rosario Dawson, who strongly resembles Ahsoka.

At first, there was concern about Mandalorian showrunner Jon Favreau and executive producer Dave Filoni’s casting decision. Over the years, Eckstein has become synonymous with Ahsoka, so it was initially difficult for the Star Wars fan base to imagine anyone else playing the Jedi.

Dawson, however, was impressive in the role and received almost universally positive reactions online.

Next, Dawson will reprise her role in one of three Mandalorian spinoff series. The show, simply titled Ahsoka, is expected to follow the character’s post-Rebels journey to find Grand Admiral Thrawn and fellow Jedi Ezra Bridger. It will likely introduce the World Between Worlds in live-action for the first time.

Casting details for Thrawn and Bridger have not been released, but rumors have been swirling that Robert Downey Jr. (Iron Man trilogy, The Avengers franchise) could play the villain. Many believe that voice actor Taylor Gray will reprise as Bridger in live-action.

What else is happening in The Mandalorian saga?

The Book of Boba Fett will air in December 2021 and will feature Temuera Morrison as bounty hunter Boba Fett and Ming-Na Wen as sharpshooter Fennec Shand. It will take place on Tatooine and could potentially introduce other animated Star Wars characters like Cad Bane.

Rangers of the New Republic is likely to be impacted by Gina Carano’s recent firing from the Star Wars franchise. It was expected to star her character, Cara Dune. No casting details for this series have been confirmed.

Finally, The Mandalorian Season 3 will once again showcase Pedro Pascal as Din Djarin. We do not yet know, however, if Grogu (AKA Baby Yoda) will appear or if he will show-up again in the rumored Luke Skywalker spinoff series.

Are you excited to see where Ahsoka’s story goes next as The Mandalorian franchise continues to expand?