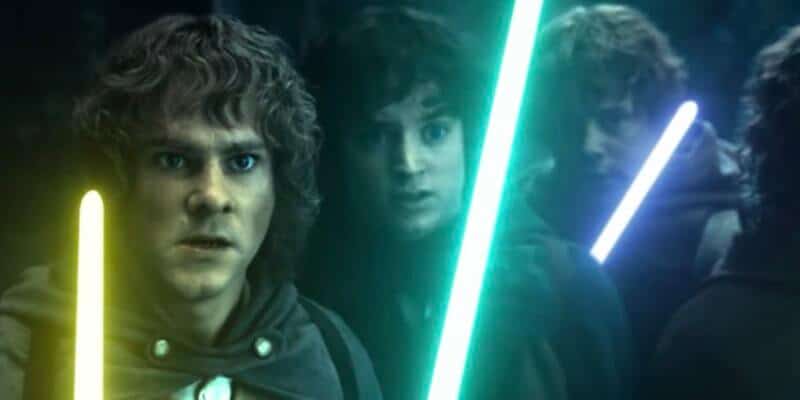 One Lightsaber to Rule Them All in a Galaxy n=Not so Far Away.

The internet is home to some of the best deepfake, and fans edit videos of classic movies and their respective characters. Many have always wondered what The Lord of the Rings and Star Wars mashup would look like, but it was only a dream.

Now, with the help of some dedicated fans, it’s become a reality.

Peter Jackson’s Lord of the Rings trilogy is one of the most popular and successful movie franchises in history, alongside, of course, George Lucas’s Star Wars. Earning 17 Academy Awards collectively and grossing over $3 billion, The Lord of the Rings is a titan in the film industry. Its ensemble cast — featuring Sir Ian McKellan, Elijah Wood, Orlando Bloom, and Viggo Mortensen — further cemented its history.

Now, Tolkien’s pen meets the pages of Star Wars, as unlikely heroes taking an unexpected journey with Sauron‘s ring to Mount Doom use the help of some lightsabers.

ImmersionVFX, a YouTube channel dedicated to creating “various pop culture edits utilizing visual effects,” took five months out of their lives to make a seven-minute video featuring Star Wars lightsabers in the hands of the Fellowship. On top of that, Legolas’s bow serves as a lightsaber blaster (if one were ever to exist!). Gandalf’s staff was transformed into a beautiful white lightsaber — much like Ahsoka Tano’s in the animated series Star Wars Rebels and live-action show The Mandalorian.

ImmersionVFX’s wizards masterfully crafted every frame of the video. The smallest details, such as the radiating glow of lightsabers on its users’ faces to Frodo Baggins de-activating his blue lightsaber while hiding from a Cave Troll, were meticulously arranged. Respective sound effects, as well as pieces of John Williams’s scores, truly make the sequence feel like it’s a Star Wars movie.

If only Peter Jackson could direct a Star Wars film (or trilogy) based on the Old Republic where large-scale lightsaber wars took place — perhaps with Keanu Reeves as Darth Revan!

With nearly 4.5 million YouTube views, Star Wars fans and The Lord of the Rings fans are enjoying every second of the video. It’s awe-inspiring how perfect the lightsabers look in the hands of Aragorn and Gandalf.

One fan, Dark Glass, pointed out:

Remember, to do lightsaber effects, it has to be done frame by frame. This guy edited approximately 8000 frames for this video, not to mention he has to edit multiple lightsaber effects for each frame. That’s dedication. I have mad respect for this dude.

Focusing on adding a lightsaber to one character is already mind-boggling, but add in hundreds of Orcs wielding lightsabers too, and you have a madhouse project on your hands.

General Grievous would love to be in that room.

What do you think about that video? Let us know in the comments below!

Comments Off on One Lightsaber to Rule Them All: ‘Star Wars’ Meets ‘Lord of the Rings’