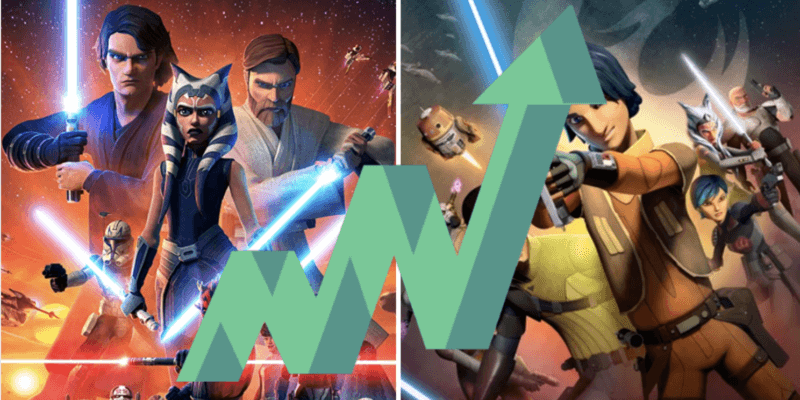 As it turns out, however, The Mandalorian hasn’t just been popular in its own right — it’s led to increased viewing for two other Star Wars series on the Disney+ streaming platform. ScreenRant reported:

This is unsurprising, since storylines and characters from both Clone Wars and Rebels — both of which Mandalorian executive producer Filoni had a major hand in — have appeared in The Mandalorian.

Anakin Skywalker’s Padawan Ahsoka Tano (voiced by Ashley Eckstein in animation) is set to play a particularly major role as The Mandalorian saga moves forward as the new epicenter of the Star Wars universe. The fan-favorite character, who appeared in both Clone Wars and Rebels episodes — will be getting her own Mandalorian spinoff, simply titled Ahsoka, that connects to the larger story told by Lucasfilm’s series trilogy that includes it, The Mandalorian Season 3, and Rangers of the New Republic.

It seems that Ahsoka may be serving as a live-action sequel to the end of the Star Wars Rebels series. The Mandalorian has already introduced — Corvus Magistrate Morgan Elsbeth (Diana Lee Inosanto) shares he is her master in Season 2, Episode 5 (“Chapter 13: The Jedi”) — Grand Admiral Thrawn (voiced by Lars Mikkelsen/rumored to be played in live-action by Robert Downey, Jr.) and there are plenty of online rumors that The Ghost ship and it’s crew, including popular captain Hera Syndulla may appear in live-action for the first time as Tano searches the galaxy for Ezra Bridger (voiced by Taylor Gray).

The Rebels Darksaber storyline involving Bo-Katan Kryze and Din Djarin is expected to continue into The Mandalorian Season 3. Kryze, who somehow — it has not been fully explained — lost the ancient Mandalorian weapon to Moff Gideon (Giancarlo Esposito) after accepting it from Sabine Wren (voiced by Tiya Sircar) has been desperately trying to earn the black-bladed lightsaber in combat in order to re-take Mandalore and secure her spot as leader.

In The Mandalorian Season 2 final — Episode 8, “Chapter 16: The Rescue” — however, Djarin won the saber in a beskar spear battle with Gideon, making him de factor ruler of Mandalore. This story arc was not resolved in the show’s second season and is expected to continue into The Mandalorian Season 3, though details have not been confirmed by Favreau and Filoni.

As for Rangers of the New Republic, few details have emerged except that it is likely to feature Gina Carano’s Cara Dune and her adventures on Nevarro. We do not know if the series will connect to any Clone Wars or Rebels storylines at this time.

Currently, the release dates for this trio of series have not been confirmed. The Book of Boba Fett and animated show Star Wars: The Bad Batch will both hit Disney+ in 2021.

Are you excited to see where Star Wars galaxy? takes us next? Did you decide to watch Star Wars; The Clone Wars and Star Wars Rebels as a result of seeing The Mandalorian?