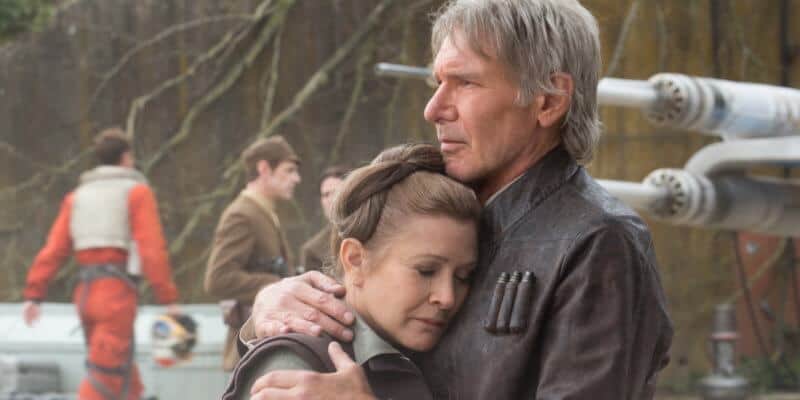 According to the report:

This would mean the first season would rework The Force Awakens, season two would change The Last Jedi, and the third would switch-up The Rise of Skywalker.

One of the most exciting aspects of this rumor is the idea that sequel director JJ Abrams already filmed a scene with the beloved core trio from Star Wars: Episode IV – A New Hope (1977), Star Wars: Episode V – The Empire Strikes Back (1980), and Star Wars: Episode VI – The Return of the Jedi that would be incorporated into the first season of the streaming Star Wars series:

…this reunion would not be a “CGI stunt”, but rather a scene filmed with all three actors – Harrison Ford, Mark Hamill, and the late Carrie Fisher – which was apparently shot back during filming for The Force Awakens.

He added: “My sources claim that footage exists of Han, Luke, and Leia together. This footage was shot on green screen, and it is a ten minute scene.”

There are no details about whether or not other sequel trilogy characters would return for this reported retcon — both Billy Dee Williams (who has played Lando Calrissian for over 40 years), Anthony Daniels (who has also played iconic droid C-3PO for over 40 years) and Kelly Marie Tran (Rose Tico) have proven their willingness to come back to Star Wars, as all voiced their respective characters in animated The LEGO Star Wars Holiday Special (2020) on Disney+.

Adam Driver, who played sequel trilogy antagonist Kylo Ren/Ben Solo, has remained ambiguous about whether or not he would play his role in the Star Wars story again.

Main character actors Oscar Isaac (Resistance pilot Poe Dameron), John Boyega (ex-stormtrooper Finn), and Daisy Ridley (Rey) have all expressed that they will not return to the Star Wars universe, so it’s possible that existing footage of them could be used to splice in with new scenes featuring cast members who are willing to come back to the Star Wars franchise.

Bear in mind that, at this time, the reported Disney+ reboot of the sequel trilogy has not been confirmed by The Walt Disney Company or Lucasfilm.

Currently, Lucasfilm’s primary focus seems to be on the continued expansion of the incredibly popular The Mandalorian saga, helmed by showrunner Jon Favreau and executive producer Dave Filoni. The series has given many Star Wars fans hope for the future of a galaxy far, far away in a post-Skywalker Saga world.

A third season of the hit Star Wars series featuring Din Djarin (Pedro Pascal) and Grogu (AKA The Child AKA Baby Yoda) will begin filming on April 5 in Los Angeles and it has already given rise to three spinoffs — Ahsoka, Rangers of the New Republic, and The Book of Boba Fett.

In addition to these four Disney+ series, multiple other Star Wars shows are set to debut on the streaming platform in the next couple of years. Among these are OBI-WAN KENOBI: An Original Series, which will feature Ewan McGregor reprising his prequel trilogy role as Jedi Master Obi-Wan Kenobi and Hayden Christensen returning as famed Sith Lord Darth Vader/Anakin Skywalker.

What do you think? Will Disney finally listen to fans and retcon the Star Wars sequel trilogy in some way?