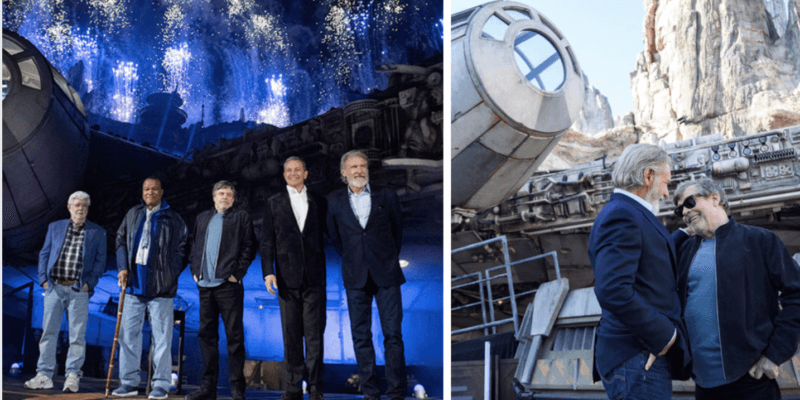 On May 31, 2019, Star Wars: Galaxy’s Edge opened at Disneyland Resort in Anaheim, California. The largest one-land expansion since Disneyland Park opened in 1955, Galaxy’s Edge has now been welcoming Guests to a galaxy far, far away for an entire year.

The celebration honoring the 14-acre Disneyland Park addition took place in front of the 100-foot long replica of the Millennium Falcon. The impressive facsimile of Han Solo’s beloved ship is one of the most visually stunning features in Galaxy’s Edge!

The Falcon sits next to one of the two Star Wars: Galaxy’s Edge attractions, “Millennium Falcon: Smuggler’s Run”. This Star Wars ride gives Guests the chance to pilot the fastest hunk of junk in the galaxy for themselves! There’s even a secret Chewbacca mode.

Getting a boarding group remains a coveted experience for Star Wars fans!

Even though Disneyland Resort currently remains closed, we’re sure the Disney Parks team will celebrate the Disneyland Galaxy’s Edge anniversary when the gates open again!

For now, you can celebrate one year of Star Wars: Galaxy’s Edge in California at home with these fun activities and treats.

Enjoy BB-8 pancakes for breakfast and then learn to draw the adorable round droid with the help of Disney Artist’s Studio! Then, venture outside for a Star Wars pool noodle lightsaber battle with the entire family.

Visit Star Wars Land For Yourself

If you want to plan a trip to Galaxy’s Edge at Disneyland or at Disney’s Hollywood Studios park at Walt Disney World, contact the experts at Academy Travel.

They will help you plan the perfect vacation to the Star Wars galaxy (drinks at Oga’s Cantina included!)

How are you going to celebrate the one-year anniversary of Star Wars: Galaxy’s Edge at Disneyland? Tell us your favorite memories of Batuu in the comments!