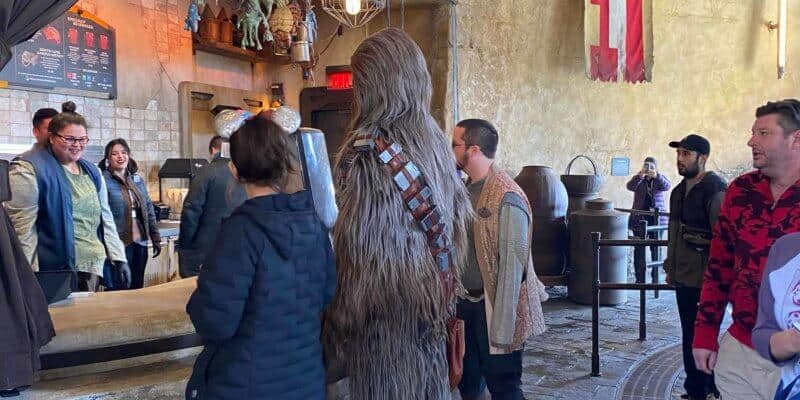 All Chewbacca wanted was some delicious roasted ronto for an early lunch. But, a cashier and the rest of the staff apparently refuse to fill his order.

What the ungrateful servers working Ronto Roasters in the Black Spire Outpost at Star Wars: Galaxy’s Edge should’ve realized is that Chewbacca–or Chewie as his friends know him–is a veteran of three intergalactic conflicts and a decorated war hero. The Wookiee, understandably, begins to pitch a fit all across the quick-service restaurant.

You can watch the entire situation here:

The situation begins with civility. Chewie waits in line and calmly approaches the counter with a certified translator ready to play his order–somewhat surprising behavior for a hungry Wookie. He has the translator explain what he wants: none of the fancy wraps, just pure roasted meat right off the spit. He brings his New Republic Credits and even goes as far as to point out which hanging ronto he wants.

Now, one would think that such an honored veteran who is personally fighting for Batuu’s freedom would receive more respect. Quite the contrary. The wait staff denied his order. On top of that, Chewie had to stand there while petty tourists received their food and drinks first. Several temporarily deaf tourists learned the hard way what happens when you get between a Wookiee and his lunch.

Chewie then tried to take matters into his own hands and liberate a roasting ronto right off the cooking droid. After all, he fought against droves of separatist droids, survived enslavement, helped defeat the Empire, and now he’s a Resistance leader battling the First Order. Who could really stop him? Having the most sympathy for him, the translator tries to help Chewie get to the delicious beasts just out of reach. Alas, it was to no avail.

The venerable Wookiee left the restaurant hangry and defeated. It’s a shame to see how the galaxy treats her heroes nowadays.

Related: Where to find Chewbacca, Rey, Kylo Ren, and other characters and creatures in Star Wars: Galaxy’s Edge

Black Spire Outpost is the setting for Star Wars: Galaxy’s Edge at the Disneyland Resort in California and Walt Disney World in Florida. Guests are transported to the planet Batuu where they can fly the Millennium Falcon, build their own lightsabers, join the Resistance, and have a truly out-of-this-world Star Wars experience.

What do you think happened at Ronto Roasters? Do you think Chewie deserved more respect? Do you think the food at ronto roasters is worth it? Let us know in the comments!