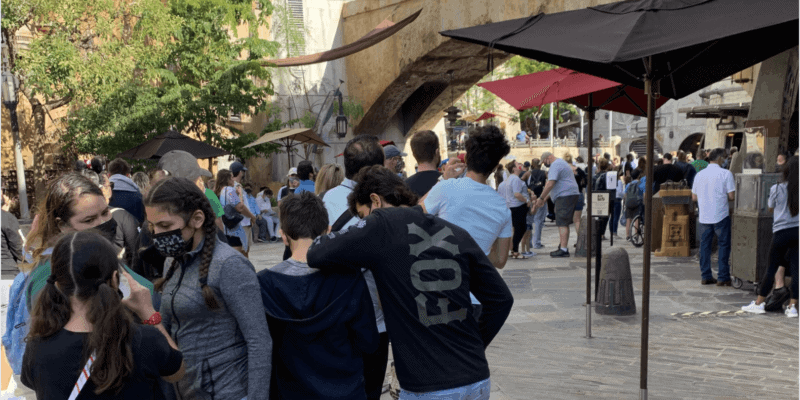 When the news broke that Disneyland Resort would finally be officially reopening the theme parks on April 30, 2021 following a 13-month COVID-19-related closure, Disney Parks fans were ecstatic. Perhaps no one was happier, though, than the Star Wars fan community.

After waiting more than a year to return to Star Wars: Galaxy’s Edge — which opened in May 2019 at Disneyland Park — the idea of once again visiting Batuu is more than a little bit exciting. The Disneyland Galaxy’s Edge expansion is a feat of Walt Disney Imagineering, just like its sister land at Disney’s Hollywood Studios in Orlando.

But with limited capacity but into place, could we see Galaxy’s Edge, an extremely popular portion of Disneyland Park, utilize boarding groups to enter in order to avoid crowds?

The popularity of Disneyland’s Star Wars land could actually prove to be problematic with the State of California’s capacity restrictions and Disney’s own social distancing regulations.

While both of these capacity limits seem quite low, there could still be overcrowding at Disneyland Park — particularly if everyone flocks to Star Wars: Galaxy’s Edge.

At Walt Disney World Resort’s Disney’s Hollywood Studios in Florida, this has been an issue. Park-goers who are lucky enough to snag reservations for Oga’s Cantina or get coveted Boarding Groups for Star Wars: Rise of the Resistance must arrive at their scheduled times.

Other Guests tend to congregate around the 100-foot-long Millennium Falcon or stand in line to enjoy Ronto Roaster wraps or Mustafarian Cinnamon Buns from Docking Bay 7.

Related: What Has Disneyland Planned For the New Expansion?

Should the same crowding issues become an issue at Disneyland Resort’s Star Wars-themed land, it is likely that theme park officials will have to take action in order to keep Guests and Cast Members safe.

Perhaps the most likely solution to Star Wars: Galaxy’s Edge overcrowding is to return to the Boarding Pass system that was used when the 14-acre expansion first opened in 2019.

Related: Why ‘Mandalorian’ Characters Might Come to Galaxy’s Edge

At that time, Guests were required to secure a time slot prior to visiting the immensely popular new land. After the allotted amount of time had passed, stormtroopers escorted the previous group of Guests out of Batuu before the next group of Guests entered.

Returning to this system, at least temporarily, could help evenly distribute the crowds at Disneyland Park during its phased reopening, avoiding the crowds that Disney World has dealt with as seen in the photo below.

Another option, of course, is that Disney could implement one-way traffic through the land’s pathways, controlling crowds in that manner — Cast Members would undoubtedly have to be stationed to enforce traffic flow.

At this time, Walt Disney Company officials have not commented on whether or not capacity at Star Wars: Galaxy’s Edge will be controlled when Disneyland Park and Disney California Adventure officially reopen next month. However, given the situation at Disney’s Hollywood Studios, it seems likely that capacity control of some kind will need to be implemented in Anaheim.

What do you think? Should Disneyland limit the number of people who can get into Star Wars: Galaxy’s Edge at first?

Ready to ride Millennium Falcon: Smugglers Run, build a droid, or construct a lightsaber? Interested in booking a stateroom at the Star Wars: Galactic Starcruiser hotel at Disney World? Let the expert team at Academy Travel help you plan your next magical trip to the Outer Rim on either coast!

Comments Off on Will Guests Need a Boarding Pass to Enter Disneyland’s Galaxy’s Edge?