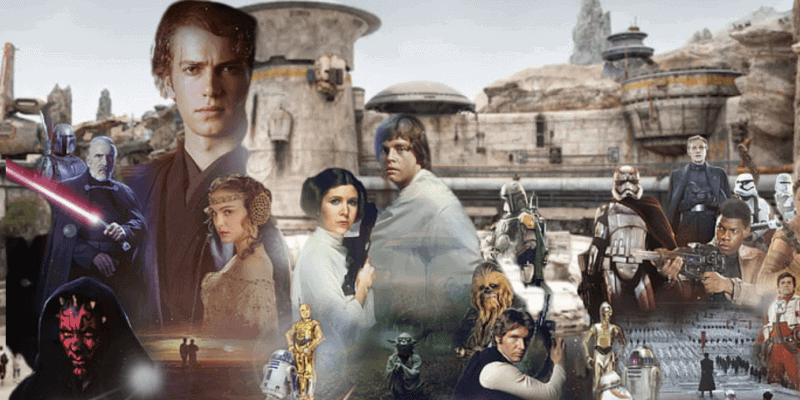 When The Walt Disney Company purchased Lucasfilm from George Lucas in 2012, there were two camps within the Star Wars fan community — those who were thrilled to see what the House of Mouse would do within a galaxy far, far away and those who were absolutely terrified of Death Star-level destruction of the franchise.

Fortunately — the somewhat disastrous Star Wars sequel trilogy aside for the moment — things have actually gone rather well, especially as Disney has integrated the Star Wars IP into its theme parks.

When the Star Wars: Galaxy’s Edge expansion, at both Walt Disney World Resort in Orlando, Florida and Disneyland Resort in Anaheim, California, was announced at the D23 Expo on August 15, 2015, Star Wars fans were abuzz with excitement.

For the first time ever, it would be possible to set foot on a Star Wars planet — Not just in a video game, but in real life.

Ever since Galaxy’s Edge opened to immense success and popularity on both coasts, Disney has been slowly expanding the Star Wars experience for Disney Parks Guests.

Furthermore, the Star Wars Galactic Starcruiser hotel is still set to open in 2021 at Walt Disney World. This immersive hotel experience is, according to Walt Disney Company CEO Bob Chapek, “truly unlike anything we have ever done before.”

As the presence of the Star Wars franchise continues to grow within Disney’s theme parks, fans have, of course, begun to speculate about whether or not additional characters could come to Star Wars: Galaxy’s Edge. Currently, a few well-known faces, such as Rey, Chewbacca, and Kylo Ren, can be seen on Batuu, but many familiar Star Wars characters are unavailable.

Here, we take a look at who, exactly, could ultimately come to Galaxy’s Edge for Guest meet and greets if Batuu remains where it currently is in the Star Wars canon timeline — between the events of Star Wars: Episode VIII – The Last Jedi (2017) and Star Wars: The Rise of Skywalker (2019), with the First Order still firmly in power.

Even those Disney Parks Guests who have never seen a single Star Wars movie probably know who Han Solo (Harrison Ford), Princess Leia (Carrie Fisher), and Luke Skywalker (Mark Hamill) are from the Star Wars original trilogy. The characters have been cemented in both cinematic history and popular culture since 1977.

Due to the trio’s popularity, it is somewhat odd that they don’t appear at Galaxy’s Edge. Given the timeline, however, the famous Star Wars characters would not look like they did during their glory days in the 1970s and 1980s.

They would, instead, be much older, as Ford, the late Fisher, and Hamill were in the Star Wars sequel movies.

It is important to note that Han Solo died at the hands of his son, Kylo Ren/Ben Solo in Star Wars: Episode VII – The Force Awakens (2015), so the Millennium Falcon pilot is unlikely to ever appear at Star Wars: Galaxy’s Edge. Both Luke and Leia were still alive when Batuu is set, however, so they could ultimately be added to the Disney Parks character line-up.

For many fans, Jon Favreau and Dave Filoni’s The Mandalorian is the best thing to happen to the Star Wars universe since Star Wars: Episode V – The Empire Strikes Back (1980).

This means that instead of an adorable infant, Grogu would be a surly, 75-year-old teenager and Djarin would be an aging bounty hunter instead of the kick-butt character we’ve come to know and love over two seasons of The Mandalorian on Disney+.

This isn’t necessarily an insurmountable problem for expert Imagineers, but it certainly does make one ponder.

Fan-favorite Jedi Ahsoka Tano was originally voiced by Ashley Eckstein — who attended a lightsaber meet-up at Walt Disney World’s version of Galaxy’s Edge — in the animated series Star Wars: The Clone Wars and Star Wars Rebels. Rosario Dawson made the character’s live-action debut in the second season of The Mandalorian.

Much like Din Djarin and the original trilogy trio, Tano could, at least theoretically, appear at Star Wars: Galaxy’s Edge. She would, however, be significantly older than she has been in Star Wars shows to date.

Nonetheless, how cool would it be to run into Ahsoka and her two white lightsabers while walking through Blackspire Outpost?

Bounty hunter Boba Fett made his first non-canon Star Wars appearance as an animated character in the wild 1978 Star Wars Holiday Special. He then appeared canonically in both Empire Strikes Back and Star Wars: Episode VI – Return of the Jedi (1983).

Most recently, Fett — now played by Jango Fett actor, Temuera Morrison — triumphantly returned to Star Wars in The Mandalorian Season 2. This sparked an entirely new wave of popularity for the character, who has long had a cult following.

Related: If You Can Spare $225,000, You Can Own This Boba Fett Merchandise

Fett was already middle-aged in his Mandalorian Season 2 appearance, so he would be positively elderly by the time Star Wars: Galaxy’s Edge is set. We also don’t know if the iconic bounty hunter will actually survive for another two-and-a-half decades or if he will somehow meet his demise on Tatooine in the upcoming Mandalorian spinoff series, The Book of Boba Fett.

As the Star Wars franchise adds an ever-increasing number of movies and Disney+ series to its upcoming slate, it is likely that new fan-favorites will emerge. Southern California news source, The Orange County Register took a look at where some upcoming shows fit into the Star Wars timeline in relation to Disney’s Star Wars land.

Remnants of the New Republic could still be around by 35 ABY in Galaxy’s Edge, but any breakout “Rangers” [referring to Mandalorian spinoff Rangers of the New Republic, which was once expected to star Gina Carano’s Cara Dune] stars would face the same storytelling challenges appearing in Batuu as Mando and Grogu.

“The Bad Batch” takes place in the immediate aftermath of the Clone Wars — which ran from 22 BBY to 19 BBY. The Disney+ animated series picks up after “The Clone Wars” TV show that was set between the events of “Attack of the Clones” and “Revenge of the Sith” films in the prequel trilogy.

Don’t expect to see any “Bad Batch” characters in Galaxy’s Edge since their stories take place a half century before the time period in Batuu.

Even more challenging for Disney is the High Republic era. This Golden Age of the Jedi Order takes place approximately 200 years prior to the Star Wars prequel trilogy.

It’s clear that, at some point, Walt Disney World Resort and Disneyland Resort officials will have to address the fact that Batuu currently operates within a very limited section of the expansive Star Wars timeline. This drastically limits the characters who are able to appear in the Star Wars-themed land.

What are your thoughts on how Disney should introduce more characters into Star Wars: Galaxy’s Edge?

Ready to experience Star Wars: Rise of the Resistance and Millennium Falcon Smugglers Run for yourself? Let the expert team at Academy Travel help you plan every magical detail of your next magical Disney vacation!

Comments Off on Disney Parks Expand ‘Star Wars’: What’s Next?