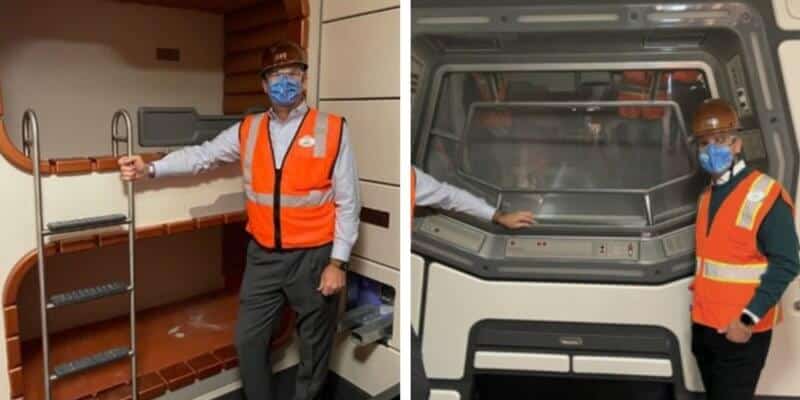 After Disney World premiered Star Wars: Galaxy’s Edge in Disney’s Hollywood Studios, Star Wars fans could not wait to see what Disney would do next with the IP. The previously announced Star Wars: Galactic Starcruiser hotel is a “priority project” for Disney, speculated to open sometime in 2021.

Previously, fans were able to see professional photographs of the rooms, but now, we’ve been given a new behind-the-scenes look from Disney executives!

Jeff Vahle, President of the Walt Disney World Resort, and Josh D’Amaro, Chairman of Disney Parks, Experiences and Products, took to Instagram to showcase some of the nearly completed rooms within the Star Wars: Galactic Starcruiser hotel.

Vahle posted the following photos along with the caption:

@joshdamaro and I enjoyed a sneak peek into the great progress the @WaltDisneyImagineering teams are making on Star Wars: Galactic Starcruiser here at WDW. Inside we visited The Atrium and looked out The Bridge windows to what will be a galaxy far, far way. We even checked out the cabins in progress, including their windows to space seen in these renderings.

Although the bunk beds are missing their mattresses for the moment, we are sure the spaces will be finalized in the relatively near future.

Upon first glance, these bunk beds do look a bit small, so it will be interesting to see more photos surface of the room to find out how big these beds actually are. It should be noted that each stateroom does have a larger bed and the built-in bunks are primarily intended for use by children who board the Halcyon.

Vahle shared two photos of the bedrooms inside the Starcruiser and mentioned that he and D’Amaro also toured the Bridge [concept art below] and the Atrium onboard. Thanks to Imagineering magic, the Galactic Starcruiser will not look out onto Disney property, but rather a galaxy far far away.

The Star Wars: Galactic Starcruiser hotel will be an immersive experience like no other. Disney’s Imagineering team to help Guests experience their own Star Wars stories, which has been a goal since the inception of Star Wars: Galaxy’s Edge. Entering the Halcyon and having the chance to sleep there will elevate that experience to a new level. Guests will live through a pre-planned 2-night, 3-day storyline that includes a “port excursion” to Batuu. Guests will be able to experience both Star Wars: Rise of the Resistance and Millennium Falcon: Smugglers Run as part of the experience — an automatic Rise of the Resistance boarding group is a pretty amazing perk!

From what we know so far thanks to concept art, we can assume that we will run into Chewbacca and stormtroopers, but Disney has not confirmed this to be true just yet. We have also theorized that since the Halycon ship will port on Batuu, both the stormtroopers and the existing storyline of Rise of the Resistance could be used to help the Halcyon’s storyline progress without deviating from the existing backstory of the Outer Rim planet.

If you want to head to Disney World for the 50th Anniversary, you should begin planning now! If you click here, our pals at Academy Travel will help you get started today.