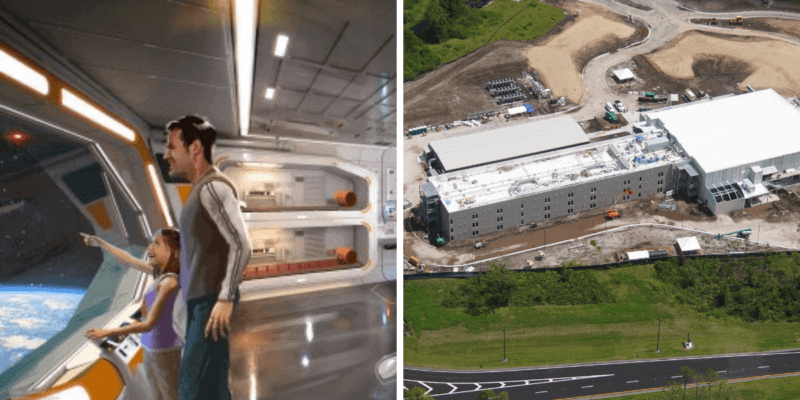 For most hotels, this question would be an infinitely ludicrous question to ask: “Why are we seeing windows installed on a hotel?”

It’s like asking, “why is that football player wearing a helmet?”

But this is no ordinary hotel. This is the highly-anticipated, fully-immersive Star Wars hotel, Star Wars: Galactic Starcruiser. When Walt Disney World Resort Guests check-in at the Galactic Starcruiser Terminal, they will no longer be at some stationary hotel in the middle of Central Florida. They will be carried off in a shuttle to the Starcruiser, Halcyon. In other words, Guests will be in space.

When plans to build the hotel were announced and concept art was released around the D23 Expo, it was said that the immersion would even be extended to the staterooms themselves. They would not get the views found at the other Disney Resort Hotels like park views, garden view, or lake views. Instead, they would wake up each day with a view that is literally out of this world.

So why does it look like the staterooms onboard the Halcyon have regular windows?

@bioreconstruct pointed this out on Twitter earlier this week, sharing a new picture of the construction project, saying “It’s unclear what the openings are for, as the cabins are said to have windows out into space, viewing Batuu.”

Aerial overview of Star Wars Galactic Starcruiser (hotel). Decks of the ship are in the large show building. Cabins aboard ship are in the slender building at left. It's unclear what the openings are for, as the cabins are said to have windows out into space, viewing Batuu. pic.twitter.com/eMN6RAgLs5

Here is a closer look at the opening:

We have no idea what these apparent openings actually are. If these openings turn out to be windows, it would mean that the level of immersion provided by this resort experience diminished significantly. But the Walt Disney Imagineers could be playing with a third option. One that allows Guests to choose between a celestial or terrestrial view out their window.

That expected level of immersion could also provide more of an explanation as to why Guests are limited to a two-night cruise aboard the Halcyon–with one “Spaceport of Call,” at Black Spire Outpost, Batuu, Disney’s Hollywood Studios–than its predicted demand. This entire project is experimental! After all, cabin fever is most definitely a thing.

Oh, and let’s not forget to mention the fact that the ship is literally going to be attacked during your stay and you can have the chance to fight back.

As much as it would shatter the overall illusion of being on a luxurious starcruiser, having the option for real windows is probably the right call because it would allow Guests some sense of relief without having to go to take their one excursion to Batuu. Through this, it would also make Star Wars: Galactic Starcruiser far more accessible for Guests than previously thought.

We can speculate all we want but, unfortunately, we have no real idea or official word what those black openings are on the new hotel. And we will not know until Disney sheds some official light on the subject. But when they do, we at Inside the Magic will be ready to update our readers with that new information surrounding the Star Wars: Galactic Starcruiser.

If you want to stay at the new Star Wars hotel as soon as it opens at Disney World, click here to work with the Authorized Disney Vacation Planners at Academy Travel. They will be able to book your reservations for the Star Wars: Galactic Starcruiser as soon as they open!

Do you think those are windows? Let us know in the comments!