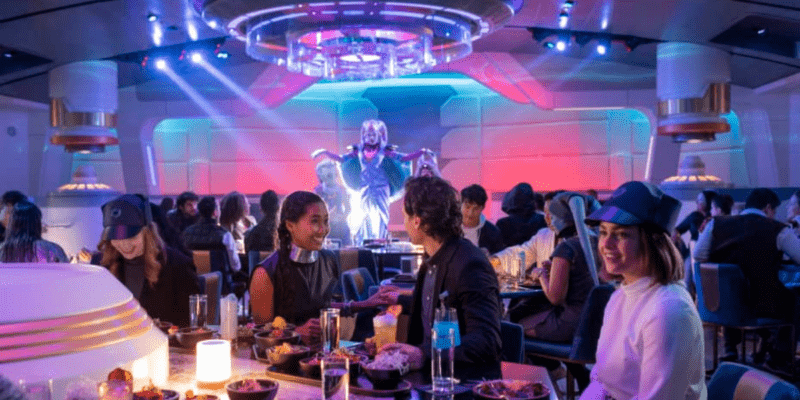 Before the Starcruiser officially opened on March 1, 2022, however, marketing efforts for the wildly pricey Disney Resort hotel fell flat. Disney Parks fans went so far as to call the design of the starship “pathetic” and Disney executives and Imagineers are reportedly aware of the Star Wars fandom’s collective “horror” regarding what they’ve seen so far.

Now, major Star Wars fans have taken to social media to share their thoughts about the Halcyon. On a sub-Reddit dedicated to the Star Wars universe, users are speaking out about exactly what they really think about Disney’s newest experience tied to a galaxy far, far away.

u/simptycoolguy was one of the first commenters, sharing thoughts about how the high price of the two-night stay could be justified:

It looks so basic. I haven’t read anything about that hotel, because I simply don’t care, but I would have done the following: Every floor has a specific theme and the rooms look accordingly. One floor has the Corellian Fregate theme, one a Millennium Falcon Theme and another a Star Destroyer Theme and so on. Or also specific planet themes like Coruscant, Tatooine, Kashyyyk, Manaan, etc. And the windows have some special effects built into them so you can change it from normal view to some underwater virtual screen for Manaan for example. That would sort of justify 5k.

u/TheExtraMile gave credit where credit is due to the Cast Members on the Starcruiser, but pointed out that the entire ship appears to have been designed by non-Star Wars fans:

That is exactly what irks me about the whole thing. I wouldn’t even call it a lack of attention to detail, there is just no attention, period.

The general concept is a great idea and from what I’ve heard the actors on scene do a great job. It just seems like a lot of the design has been done by people who don’t really know much about star wars.

u/Tearaway32 concurred that the experience overall looks positive, but is not a fan of the fact that it takes place during Disney’s sequel trilogy in the Star Wars timeline, essentially alienating many fans of George Lucas’s original trilogy and prequel trilogy:

I agree, the experience itself looks great and I would possibly be stupid enough to find a way to spend that kind of money – if it were recognizably based on Star Wars to me. I don’t care about all the rest of the new story elements they’ve written, and I don’t even care for seeing the main characters – but if the story immersed you in TCW [The Clone Wars] or GCW [Galactic Civil War], I’d have serious FOMO about it. Putting it into the DT [Disney trilogy] year renders it completely meaningless to me.

The timing of Galaxy’s Edge and the Galactic Starcruiser in the Star Wars canon is a common complaint from long-time fans who do not enjoy Disney’s divisive trio of films.

u/LS_DJ noted that the experience is more expensive than staying at Disney World Deluxe Resort like Disney’s Grand Floridian Resort & Spa or Disney’s Contemporary Resort, which is an issue that may hinder many Guests from booking passage on the Starcruiser:

If I was going to spend an extra $5k to 6k at WDW, I would just do a private tour for a day and get to skip all the lines and just stay at the Grand Floridian or the Contemporary and have a much better time

What are your thoughts on the Starcruiser if you’re a big Star Wars fan?