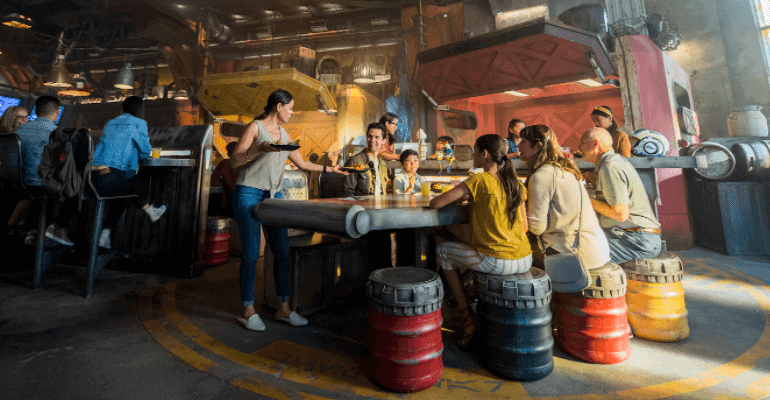 Now, one Guest has removed the theming from the Docking Bay 7 and Ronto Roasters menus to make it easier for non-Star Wars fans to place orders.

I recently got back from a trip with my husband and in-laws. To help simplify food orders in Hollywood Studios, I “translated” the menus at Docking Bay 7 and Ronto Roasters to remove the star wars lingo. Personally, I love the immersion, but this definitely helped my in-laws pick what they wanted for lunch without confusing them! I figured it might help others too.

Fruit with Sweet and Sour Sauce: Sticks of Jicama, Cucumber, Pineapple, Melon and Dragon Fruit doused in a Tamarind Sauce and dusted with Peppercorn Ash (Plant-Based)

The user explained, “they’re [the in-laws] in their 60s and don’t really read the descriptions thoroughly. It was easier to type this up than explain stuff like tip yip, Batuuan Beef, and Crispy Topato.”

If you are not a major Star Wars fan — or if you’re just a picky eater — this helpful “English” menu could be very useful next time you find yourself on Batuu!

At this restaurant housed in a working hangar bay, choose from a variety of dishes prepared with ingredients from across the galaxy—all of it delicious, but none of it familiar. Chef Strono “Cookie” Tuggs has docked a food freighter loaded with fresh supplies and he’s ready to satisfy the appetites of visitors and locals alike with an array of exotic offerings. His planet-hopping travels allow him to prepare fare with unusual flavors that delight customers.

Once you’ve got your grub, sit inside the spacious hanger, or grab a table in the rustic outdoor seating area surrounded by the crumbling walls of the old marketplace.

What do you think about this translated Galaxy’s Edge menu?