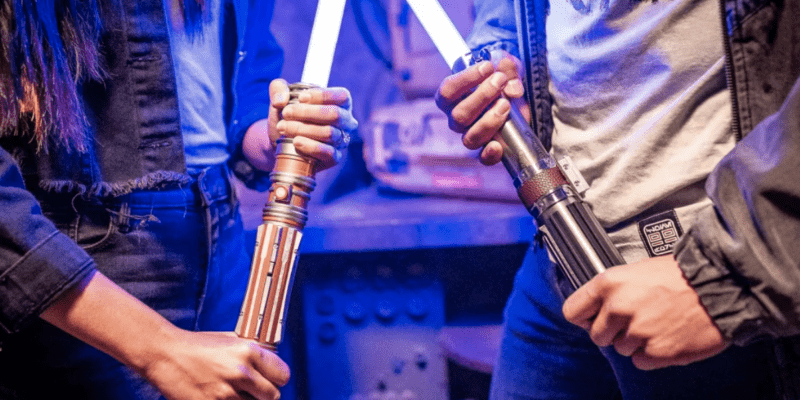 On May 4, 2021 — Star Wars Day — The Walt Disney Company officially unveiled one of its latest pieces of technology, a retractable lightsaber that looks like it fell straight out of the Star Wars galaxy.

This lightsaber was specifically created for the Star Wars: Galactic Starcruiser hotel experience and is not going to be available for Guests. At a preview event for the new Walt Disney World Resort property, a Disney spokesperson told IGN:

“Unfortunately, that lightsaber isn’t for guests to use or purchase. It’s strictly for use by the performers.”

Now, however, we may have learned exactly how this lightsaber will play into the Galactic Starcruiser storyline — and that things are not going as smoothly as planned with the “real” Star Wars weapon, which can be seen in action below.

According to a new video [below], Rey will appear with the lightsaber via video after Kylo Ren and a “ton” of First Order stormtroopers invade dinner on the second night of the Halcyon‘s voyage. Presumably, Rey will then disappear from the screen and appear in the dining area — likely the Crown of Corellia — in person.

Per the video, however, the lightsaber has been significantly more of a challenge than Walt Disney Imagineers apparently anticipated:

“Now, they told me they’re having major problems with this thing because it’s very much a measuring tape metal. If you know what a measuring tape is, so it’s very flimsy. So if there’s any kind of heavy movement, it will bend or break and, boy, won’t that be — uh — interesting looking.”

Although Guests onboard the Corellian luxury starliner won’t be able to use the retractable lightsaber model, every passenger onboard the Halcyon will have the opportunity to engage in lightsaber training using a weapon presumably more like those found at Savi’s Handbuilt Lightsabers workshop at Star Wars: Galaxy’s Edge.

“Wield a lightsaber and face off against a remote training device in this exclusive interactive activity that is far beyond anything you’ve experienced before. Put your skills to the test! Guests must be at least 7 years of age to participate.”

The Star Wars: Galactic Starcruiser Resort hotel “blasts off” to a galaxy far, far away on March 1, 2022.

What do you think about Disney reportedly having problems with its retractable lightsaber?