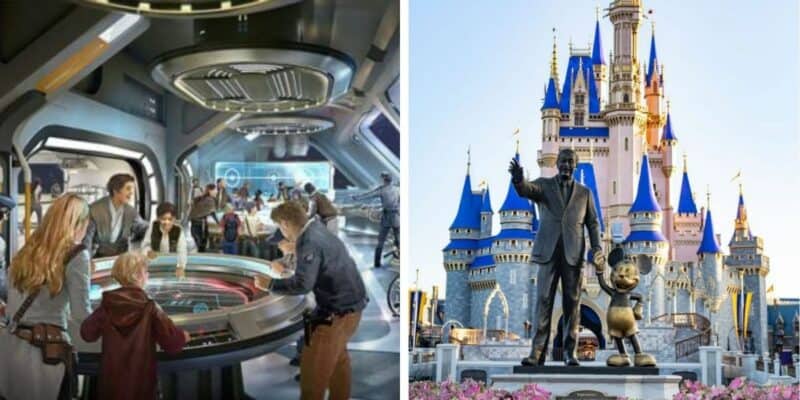 Now that the Star Wars: Galactic Starcruiser has an opening date, Guests cannot wait to be able to book their stay and blast off into a galaxy far, far away.

On March 1, Guests will be able to board Launch Pod so that they can enter the Halcyon starcruiser for their two-night, three-day experience. The entire stay will follow a storyline where Guests can enter their very own Star Wars experience. Characters such as Chewbacca will help create the story, in which Guests will watch unfold around them. Guests will also get to visit the Outer Rim for a planetside excursion to Batuu — AKA, they will be transported to Disney’s Hollywood Studios!

Disney recently released new images for the Starcruiser as well, which are our first non-computer-generated images, which is exciting! Although Guest’s vacation aboard the Starcruiser will surely be amazing, as we mentioned, it will only be for two nights. Many Guests visiting the Walt Disney World Resort tend to want to stay for a more extended visit, so knowing if and how you can tie that in with another Disney World Resort remains essential!

Today, we spoke with Ann Morrow Johnson, Executive Producer and Creative Director for Star Wars: Galactic Starcruiser in an interview during the Walt Disney World Resort 50th anniversary press event, who said more on how vacation packages will work.

“It’s a great way to think about your vacation to Walt Disney World, actually because when you’re here staying at one of our wonderful Resorts — Grand Floridian or Polynesian, any of the others — that’s your opportunity to really go explore EPCOT, the Magic Kingdom, Animal Kingdom, all of those pieces. Because once you’re onboard Star Wars: Galactic Starcruiser, it really is a complete vacation experience in and of itself, and we give you an itinerary. So for the two nights that you’re onboard Star Wars: Galactic Starcruiser, that’s really an experience where you’re in that storyline. Of course, you do visit Disney’s Hollywood Studios as part of your experience when you’re on your shore excursion to the planet of Batuu. But even there we’re giving you story missions to go on throughout the land. We’re giving you access to Rise of the Resistance and Millennium Falcon: Smugglers Run, and we’re giving you story reasons to do them. You can visit the rest of the Park if you want to, but we’re really focusing on giving you a robust enough storyline that you’re playing Star Wars for those two nights. So it’s a great opportunity to book an additional stay to see the rest of Walt Disney World.”

It seems that Disney is encouraging Guests to extend their stay when they visit so that they can see the rest of the theme parks, as the Starcruiser experience will be very controlled and based on the Star Wars reality. If Guests want to experience Disney as a whole, even Star Wars: Galaxy’s Edge on their own time with their own itinerary, adding onto your Disney vacation will be essential to make sure you are able to accomplish everything.

Do you plan on staying in the Star Wars: Galactic Starcruiser once it opens? Would you extend your stay at another Disney Resort?