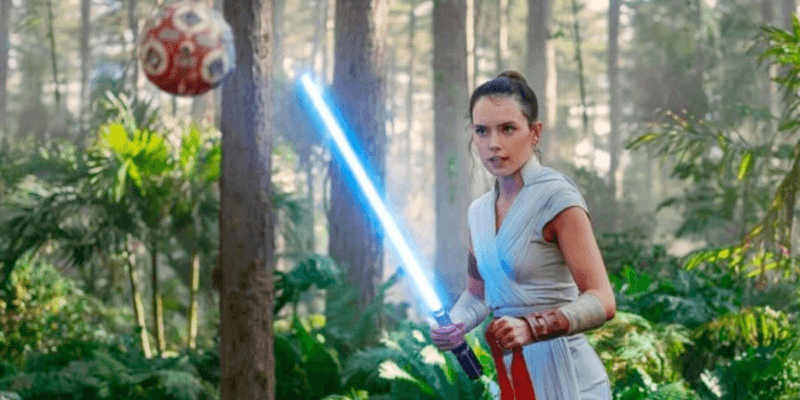 In the most revealing update on the new Star Wars hotel so far, Disney has unveiled mock itineraries, the first-ever Star Wars: Galactic Starcruiser trailer, and — perhaps the most anticipated detail — pricing. To give Guests a better understanding of what else they’ve got up the sleeves of their Jedi robes, Disney has also teased a new Lightsaber Training adventure that promises to be more realistic than any lightsaber experience that’s come before!

If you’ve ever had the opportunity to construct your own lightsaber at Savi’s Workshop in Star Wars: Galaxy’s Edge in either Walt Disney World Resort or Disneyland Resort, then you know firsthand the high bar Disney’s Imagineers have set with authentic lightsaber experiences. With this latest announcement, Disney is touting a Star Wars universe Force encounter beyond even the fun and theatricality of Savi’s Workshop, played to the hilt!

While specific details are under wraps, for now, Disney has revealed art from the Lightsaber Training experience that invokes the iconic lightsaber training scene from Star Wars: Episode IV – A New Hope (1977). In the scene from the original trilogy, Luke Skywalker (Mark Hamill) trains with a lightsaber under the direction of Obi-Wan Kenobi (Alex Guinness) aboard the Millennium Falcon. Luke uses Han Solo’s (Harrison Ford) seeker droid and training remote to hone his skills with the Force. In the sequel trilogy’s Star Wars: Episode VIII – The Last Jedi (2017), Rey Skywalker similarly uses the Marksman-H training remote for improving her lightsaber skills

As a guest of the Star Wars: Galactic Starcruiser resort — aged 7 or above — you can wield your lightsaber and become one with the Force! Disney Parks describes the experience as being light years ahead of its past lightsaber adventures, saying,

“Wield a lightsaber and face off against a remote training device in this exclusive interactive activity that is far beyond anything you’ve experienced before. Put your skills to the test! Guests must be at least 7 years of age to participate.”

Related: Disney’s Galactic Starcruiser May Seat Guests With Other Parties For Dining

Back in May, Disney Parks Blog teased the development of a “real” lightsaber — a hyperrealistic prototype of a lightsaber featuring a blade that appears to emerge from the lightsaber hilt just as an actual lightsaber would behave in the Star Wars movies. If this technology is included in the Lightsaber Training experience, that would certainly be “beyond” anything Star Wars fans have seen before.

Related: My Disney Experience Will Be Important Aboard Galactic Starcruiser

As passengers aboard the Halcyon starcruiser, Guests of Star Wars: Galactic Starcruiser will participate in a two-night, three-day deeply immersive, and authentic Star Wars experience. Some of the highlights of a stay include a bridge training for piloting the Halcyon itself, interactive dining in the Crown of Corellia Dining Room, and a planet excursion that continues your story in the Black Spire Outpost on Batuu — better known as Star Wars: Galaxy’s Edge in Disney’s Hollywood Studios.

Realted: What You NEED to Know Before Visiting Galactic Starcruiser

Pledging an “entire galaxy of possibilities,” the Star Wars: Galactic Starcruiser encourages Guests to dress in Star Wars costumes in order to create their own unique character. Disney sums up the adventure in store, offering Guests a chance to choose their own path, explaining,

“While your story unfolds, you’ll have the power to choose your path. Will you follow the rule of the First Order or join the Resistance in the secret plot? Strike a bargain with a gang of smugglers or sit back, sip a cocktail and watch it all from a safe distance?”

It’s unclear if you’ll need to construct your own hand-made new lightsaber by sourcing a kyber crystal at Savi’s Workshop to participate in the Lightsaber Training at Galactic Starcruiser, or if you’ll be able to get your hands on lightsabers another way. Whether you choose to be a Jedi Master or a Sith Lord — or blue blade, green blade, or red blade— wielding a lightsaber hilt for real is every Star Wars fan’s dream. Now, it looks like that dream will become more plausible than ever before. However, with standard cabin pricing starting at $1,209 per guest, Star Wars fans may need to cash in a few bounties to make their fantasies a reality.

Are you ready for the Lightsaber Training on Star Wars: Galactic Starcruiser? Let’s hear from our diehard Star Wars fans in the comments!