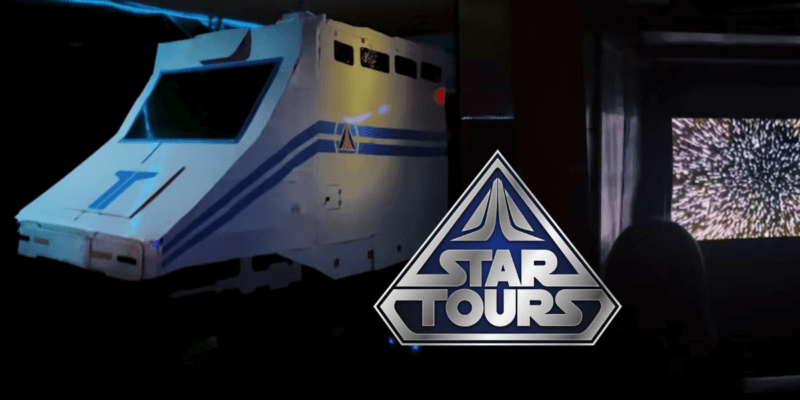 A dad built a DIY replica of the iconic Disneyland Star Wars attraction Star Tours – The Adventures Continue using inexpensive materials, a lot of creativity — and a little Disney magic. The Disney superfan father created the replica of the Star Tours flight simulator in his garage for his daughter’s birthday party — a plan that came together during the California park’s prolonged pandemic closure.

Former Disneyland Annual Passholder Mark Eaton is a filmmaker and father of two who came up with the idea for the Star Wars attraction at home when his daughter, 8-year-old Indy, asked for a Disneyland-themed birthday party. Eaton, the amateur Disney Imagineer, told Orange County Register, that he’d been developing the project — as well as a DIY version of the Mad Tea Party attraction — for more than a year, as the dangers of the coronavirus pandemic forced the Eaton family to cancel Indy’s birthday party. Indy and 11-year-old sister Eisley rode the teacup prototype throughout the quarantine and helped their father test early versions of his Star Tours re-creation. Eaton explained,

“The teacup was finished first and I was building the Star Tours stuff as the corona got worse and worse. Then it was clear that we weren’t going to be able to have the party that year.”

The yearlong postponement of Indy’s Disney Parks birthday party gave Eaton plenty of time to work on his Star Tours project. Once completed, Eaton was able to unveil the finished product at Indy’s following birthday. Friends and neighbors got a chance to experience the #DisneylandAtHome attraction a few weeks before the real Disneyland in Anaheim reopened after being closed for more than 400 days due to California’s pandemic restrictions.

Eaton came up with a simple way to re-imagine the Star Tours StarSpeeder at a cost of about $300. Using a frame of two-by-fours as the StarSpeeder’s base that could accommodate 3 passengers at a time, the sides were covered in cardboard, and painted to resemble the real deal Star Wars simulator. Eaton then installed a used flat-screen television screen – procured for $30, to act as the cockpit window — showing point-of-view videos of Star Tours rides from YouTube creating a virtual ride experience.

Eaton operated the ride by manually moving the StarSpeeder up, down and side to side in response to the orientation of the YouTube video displaying on the screen using front loaded counter-balances. Eaton described his simple design, saying,

“I just kept coming back to what is basically a super heavy duty teeter totter or seesaw…It’s just controlled from the back by watching what’s on the screen and rehearsing it so you know the movements and the timing. You just mimic it the best you can.”

Eaton dressed up as Han Solo while other family and friends dressed as Darth Vader, Princess Leia, Mickey Mouse, and Minnie Mouse — making for fun Disneyland-style character interactions before each ride. Eaton also utilized his living room as a kind of queue area, showing pre-show videos for Star Tours found on YouTube while party guests waited their turn for a ride.

The party also featured Eaton’s version of a teacup from Disneyland’s legendary Mad Tea Party, with Cinderella’s Fairy Godmother assisting children on and off the ride. The party also featured a dining room converted to resemble Tomorrowland with a Tron Lightcycle rocking horse, and a so-called “Space Mountain monorail” driving along a toy car track. The Eaton’s kitchen was made up to be Disneyland’s Star Wars Galaxy’s Edge with lightsabers and other Star Wars toys and decorations. House-made Dole Whip was available to guests in the Eaton’s Tiki Room.

The “Disney At Home” trend became a popular activity during the closing of Disney Parks worldwide during the coronavirus pandemic. Disney fans used materials they could find around the house or local home supply stores to recreate Disney attractions like Haunted Mansion, Space Mountain, Spaceship Earth, “it’s a small world,” Splash Mountain, and Pirates of the Caribbean.

Star Tours is a motion simulator attraction that first debuted at Disneyland in 1987. It was developed in partnership with George Lucas and Lucasfilm. In 2010, Star Tours was refurbished and re-opened as Star Tours — The Adventures Continue. The attraction is also featured at Disney Parks Disney’s Hollywood Studios in the Walt Disney World Resort, Disneyland Paris, and Tokyo Disneyland.

The Disneyland Resort website describes the ride as follows:

“Launch into outer space on a thrilling tour of the Star Wars galaxy aboard a Starspeeder 1000. Come face-to-face with Kylo Ren, Poe Dameron, BB-8 and other characters as you voyage to amazing alien worlds like Jakku and Crait—an all-new planet from Star Wars: The Last Jedi.

What do you think of this pandemic #DisneylandAtHome project? Let us know in the comments!