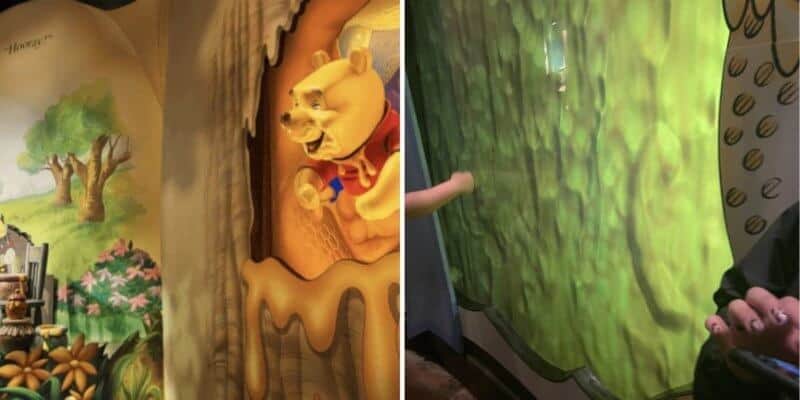 Each queue for any Disney World attraction is specifically themed for the ride itself. Considering Guests often have to spend a lot of time in a queue before riding an attraction, Disney decided to make that time count as part of the overall attraction experience. Sometimes attraction queues may utilize a Guests time waiting as a way to build up a story and immerse them into another world so that they are already in the right headspace before riding the attraction.

Some perfect examples of attractions that do this are Haunted Mansion at Magic Kingdom and Tower of Terror at Disney’s Hollywood Studios. Both attractions have spooky looming buildings that pull Guests in, and as Guests wait in line, they can see the story of either building come to life. It also helps to have a preshow in each attraction that sets up both attractions perfectly.

Other attractions utilize interactive elements to keep Guests engaged while waiting. Attractions like Dumbo the Flying Elephant and Seven Dwarfs Mine Train both have interactive details that Guests can physically play with while waiting to ride the attraction. Because of the ongoing pandemic, we saw many of these offerings closed off from Guests as they were high touchpoints for quite some time.

However, we have recently started to see these elements return to their queues! The most recent attraction to add its interactive elements back is The Many Adventure of Winnie the Pooh.

The queue for this attraction is filled with things that many kids and adults alike can play with. Below, you can see a Guest wiping away honey on the interactive screen to reveal characters from the attraction, such as Pooh and Tigger!

Disney describes the attraction and queue as:

It’s a delightful romp through scenes and songs scenes made famous in the classic Disney film Winnie the Pooh.

Before Your Adventure
Explore Rabbit’s Garden, paint with honey and visit Eeyore’s home.

What is the next thing you would like to see return to Disney World? Let us know in the comments below!