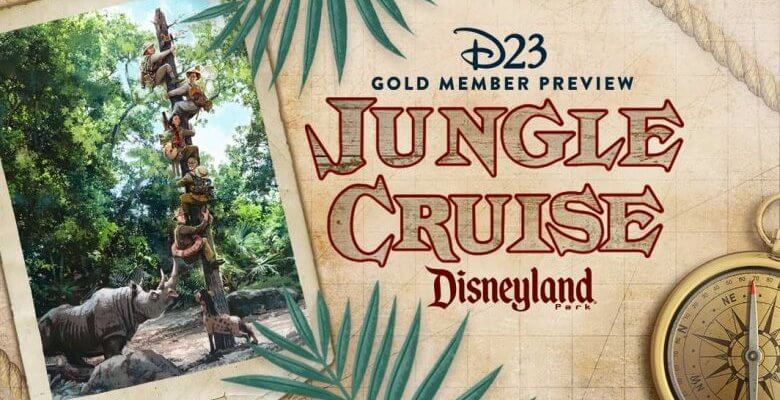 Although many attractions at Disneyland Park are now available for Guests to ride, some are still not yet open to the public.

Fan-favorite attraction Jungle Cruise at Disneyland has been undergoing a reimagining as Disney has altered the storyline to be more inclusive and culturally appropriate. At Disney World, the Magic Kingdom version of the attraction is also undergoing a similar change; however, the ride has not closed down during the refurbishment.

At Disneyland, Jungle Cruise has been fully closed since the theme park reopened. The reimagined attraction reopens on July 16, but certain Guests will have the chance to experience it early!

Disney is offering D23 Gold Members the opportunity to ride the reimagined Jungle Cruise before anyone else! The event will happen at sunrise before park opening at 5:30 a.m. and will cost Guests $75.00 if they would like to ride. Guests will also get their very own skipper hat and VIP credential. The event will begin at the Tropical Hideaway in Adventureland in Disneyland Park.

Our master of ceremonies, D23 Team Member (and former Jungle Cruise Skipper) Justin Arthur, will get things going with a special panel of creative talent from Walt Disney Imagineering as they take us on a deep dive into the history and re-imagining of the beloved attraction. From its origins back to Walt Disney and opening day, to its long legacy of skippers, global adventures, and the latest sights on the legendary river banks, we’ll celebrate it all just in time for the attraction’s 66th anniversary!

Then the Jungle awaits! Making your way through the boathouse, you’ll board your explorer launch as your skipper (armed with the latest puns) will take you down the rivers of adventure to be among the first on the official re-opening day to see all the “gnu” sights to be discovered!

In addition to a skipper hat and credential, guests will be treated to a few other commemorative surprises!

Once the event wraps up at 7:30 a.m, Guests will be escorted out of the park, as this ticket does not represent or include a regular theme park admission or reservation for Disneyland. The event is incredibly limited, so all fans of Jungle Cruise who are itching to see the newly updated attraction should sign up for the event as soon as possible.

The event will also be filmed, and Guests attending may be used for promotional material.

Do you think paying $75.00 to ride the new Jungle Cruise first is worth it? Are you a D23 Gold Member? Let us know in the comments!