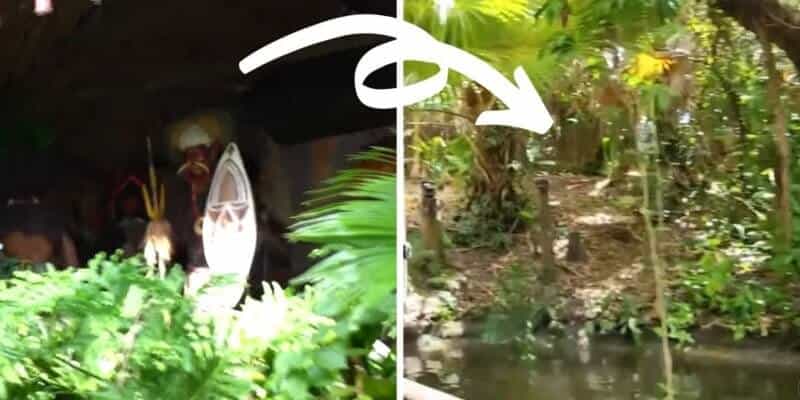 As many of you know, Jungle Cruise at Walt Disney World has been undergoing changes for a few months now as part of the reimagining of the ride. And as Disney Imagineers continue working hard to complete this project, Guests are noticing more changes happening at the Disney World ride.

On a recent trip to Magic Kingdom, Brian and Amanda went live on YouTube to bring their followers along for their day filled with magic. One of the attractions they rode was Jungle Cruise as they wanted to see what changes are happening as the reimagining continues.

In case you were not aware, elements of the popular theme park ride are currently being reimagined for Guests so they can enjoy a brand-new Jungle Cruise experience called Rivers Journey. This refresh will also be taking place at Disneyland Park at Disneyland Resort in California.

The new version of the attraction is part of Disney’s efforts to tell diverse, inclusive stories across the theme parks. And now we are seeing elements being removed from Jungle Cruise at Disney World right before our eyes.

First, one of the biggest changes Guests have noticed ever since mid-April is the adventure group that is usually seen climbing the pole has been removed (as seen in the image above). We knew this would happen as Disney announced a new group of travelers would take over.

One of the more recent changes that occurred is during the headhunters section of the ride. If you ride Jungle Cruise, you will notice the animatronics of native dancers have been removed from the hut.

Additionally, more recently, the entire hut has been removed. You can see this reflected in the image above.

However, the drummers next to the old hut can still be seen, which you can see in the image above.

Another element that went missing from the ride was Trader Sam, however, we now know his legacy will continue on with Jungle Cruise as he will be collecting all your leftover safari goods for his new Lost & Found location.

Right now, the shack is covered with a tarp, but the Skipper pointed out the obvious structure, joking that there are a bunch of elephants living inside.

If you want to take a POV ride on Jungle Cruise before these changes were made, check out our YouTube video here:

Jungle Cruise is located both at Disneyland Park at Disneyland Resort in California and Magic Kingdom at Walt Disney World in Florida. Both versions are going through the reimagining at this time.

Are you excited to see Jungle Cruise continue its revamp? Let us know in the comments below.