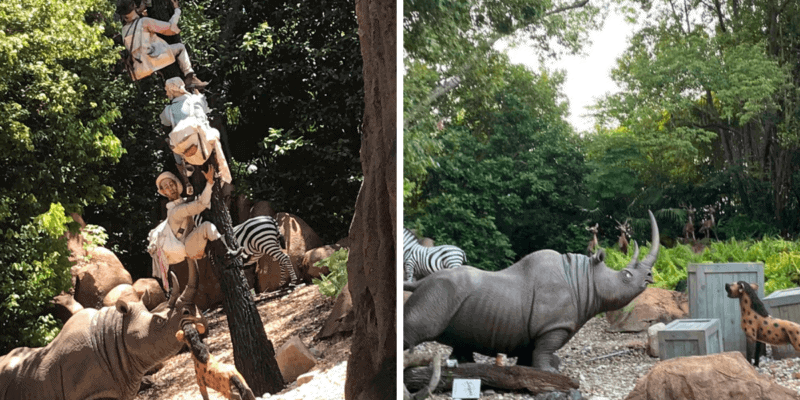 We get the point! (Rhino pun!) Disney has been making some big changes to the Jungle Cruise in the last few weeks. After the swift removal of Trader Sam (and the installment of what seems to be a larger scene pad), this week we see the trapped safari and pole taken out of the Magic Kingdom attraction… we’re not lion!

With the now-active renovations to Disney’s exotic Jungle Cruise attraction, the reimagining is fully upon us. “Casting off” from both east and west coasts, the theme park ride will be digging deeper into its own punny backstory with a less problematic depiction of specific characters and the addition of some fun scenes. The attraction’s backstory, including the trapped safari scene, is part of that work.

In the weeks past (and understandably years) the trapped safari scene has always given us a giggle. The angry rhinoceros and other wild animals are the winners here… and the hyena is never short on laughs. Twitter user Nick, who goes by the handle @NickatDisney, looked back on his past cruises, saying:

Rode the Jungle Cruise last week, glad I got to see the Trapped Safari scene before it is changed!

His photos capture a few angles of the scene as it once was, male adventurers and guides alike:

Rode the Jungle Cruise last week, glad I got to see the Trapped Safari scene before it is changed! pic.twitter.com/fRgKX2scV4

But as this reimagining begins (the Disney World attraction is remaining open during the work) we’re left wondering how fast the replacements will show up.  A bird-watching biologist, an entomologist, a scenic painter, and more are due to arrive on the tree (no longer a pole) and we’re excited to see them.

To those Disney fans not understanding where the safari group and pole went (or perhaps arguing against the change) Twitter user Parker, using the handle @AdvParker, advertises that the scene will return for the better. They also emphasize that these changes are important, as Disney embraces and acts on its new key of inclusion.

Hi. We do realize that the explorers on the pole in Jungle Cruise are making a return, right? They’re just gone so they can be updated. So before you complain about “cancel culture”, maybe learn the facts??? […]

Hi. We do realize that the explorers on the pole in Jungle Cruise are making a return, right? They’re just gone so they can be updated. So before you complain about “cancel culture”, maybe learn the facts??? And check your racism while you’re at it. pic.twitter.com/SBKTnnoveU

Ready to see the changes for yourself? Call on the travel professionals (without the Skippers’ legendary comedic tone!) at Academy Travel. The award-winning Earmarked Diamond staff will point out all their favorite punny spot so end up more like the strong rhinos than the ones getting the point! You can contact their concierge by calling Academy Travel at 609-978-0740 or by clicking here ! No matter where you stay, Academy Travel can make sure you have a joyous river cruise!

Are you excited to see the changes taking place while the Jungle Cruise attraction is still open? Leave us a comment below: