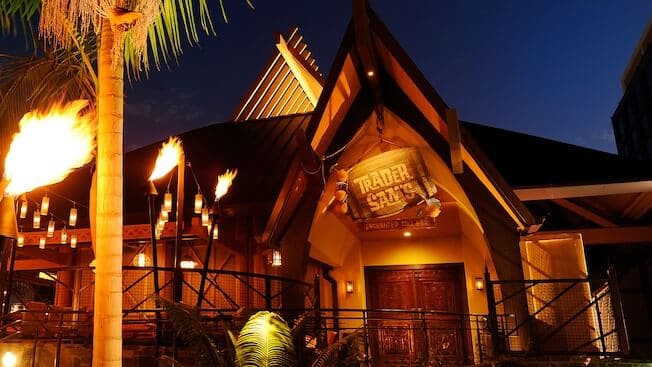 Ah, Trader Sam’s — The bi-coastal watering hole for Tiki and Adventureland enthusiasts, named after the last animatronic on its parent attraction. What we explorers love about this tiny lounge is the atmosphere, the immersive details, and of course, the handcrafted cocktails.

Created at Disneyland Resort and the Walt Disney World in 2011 and 2015, respectively, these drinkeries are well-loved and have a cult following. But as a faithful follower, I have to wonder if these bars will be affected following the Jungle Cruise attractions receiving additions and updates later this year.

While both the Polynesian Resort Grog Grotto and the Enchanted Tiki Bar are similar, they do have their differences. Iconic drinks in specialty glazed tiki mugs can only be collected at one location or another (though there are a few drinks on both coasts) and some of the Skipper jokes remain local to the bars.

For instance, the schpiel given when a Guest orders a Hippopoto Mai-Tai varies on the West Coast with a lack of audible poacher’s shots. Many of the Enchanted Tiki Bar mugs and offerings are local, like DLR’s sweet blue Piranha Pool punch as well as the extensive food menu.

Many of the touches from the Grog Grotto are actually local to Walt Disney World, too. Former Imagineer “Trader Brandon” gives away lots of his decor tips in his book Field Guide to Tiki Decorating, including mentions of how he designed Trader Sam’s Grog Grotto with special touches.

The Goddess Uh ‘Oa, which lights up with commanding blue light paint and glowing eyes when her namesake cocktail drink is ordered, actually used to sit inside the Enchanted Tiki Room before the “New Management” era came into being.  Here she is, pictured below. What an awesome repurpose!

Many items like this are tied to the Parks, like the sinking WDW barstools poached from the Adventurer’s Club, and Disney S.E.A. Society details. With all this integration, I have to wonder if old items from the now-running Jungle Cruise ride will end up in the bars, or perhaps items referring to the Jungle Cruise retheme will be installed to reflect the changes?

There’s always the “fear” that the new Jungle Cruise movie may make an (unwelcome?) appearance in the bars, though, with the movie not yet having come out, I will not pass judgment on the rating/quality/etc. of the film. While it would make perfect sense to have a photo of Dwayne “The Rock” Johnson or Emily Blunt’s characters in a sepia tone, bamboo clad frame, I hope that may be the extent of it, especially since it had been confirmed that the movie will not have a place in the physical boat ride attraction.

Do you think the bars will be affected by the update of the Jungle Cruise boat ride attraction? Leave us a comment below with your thoughts.

Editor’s Note: The opinions reflected in this article do not reflect those of Inside the Magic overall.