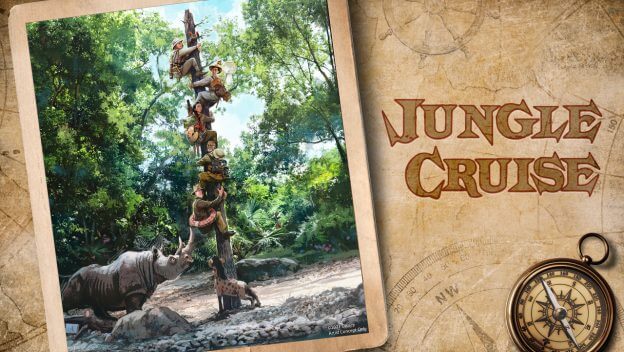 In a question and answer discussion with D23, Disney Imagineering Creative Portfolio Executive Chris Beatty gave insight as to what fans can expect when the ride is updated. Beatty said that the original version was filled with humor and the attraction is all about the Skippers:

I think the Jungle Cruise everybody remembers now is the Marc Davis version, which has a little, well, a lot more humor when the skippers really get going. That attraction is really all about the skippers, if you think about it. They bring that attraction to life; they are the heart and soul of it. So you couple that with Marc Davis’s renderings and the characters he brought to life along the river’s edge, and it’s really just a win-win.

Beatty went on to say that the attraction will have the same heart and soul that fans love, but will address some problematic areas the attraction faces:

We want to make sure everybody has the best time—that guests from all over the world can connect with the stories we share and that how we bring those to life are respectful of the diverse world we live in. And when they get off the attraction, they know that we have done our homework because these are the details that matter. When you look at the Jungle Cruise, as it is today, there are just a couple of scenes that don’t do that and needed a refresh. But I want to make sure people know we are not changing the whole Jungle Cruise. This is not a re-envisioning of the entire attraction. It’s the Jungle Cruise you know and love, with the skippers still leading the way, and at the same time, we’re addressing the negative depictions of “natives.” So that’s one of the scenes we’re going to go in and change.

Both Disneyland and Disney World will be receiving an update that will see both versions tell the same story. Beatty explains that Imagineering will “take this as an opportunity, right? So as we look to clean up a lot of the challenges that we have in the attraction, we want to make sure we go in and add all the humor that Marc Davis gave it, all those years ago. Anything new we add will be in that tone. And for the first time, we are actually linking scenes together.”

He goes on to say that the characters we see on the attraction will now have their own backstory, including cultural heritage. This is in order to bring more depth to the story that the Jungle Cruise is telling. Beatty says “I think our guests will connect with these characters in new ways.”.

It appears that the Skippers will be the humor but the story of the Jungle Cruise will be more in-depth as the storytelling is refined. Imagineering taking the time to change scenes that are no longer appropriate. This is similar, in some ways, to the retheme of Splash Mountain to Princess and the Frog.

Disney has not given an official date on when this refurbishment will be complete, but we cannot wait to see what they have in store for us!

What do you think about the Jungle Cruise receiving a refurbishment on this scale? Let us know in the comments!