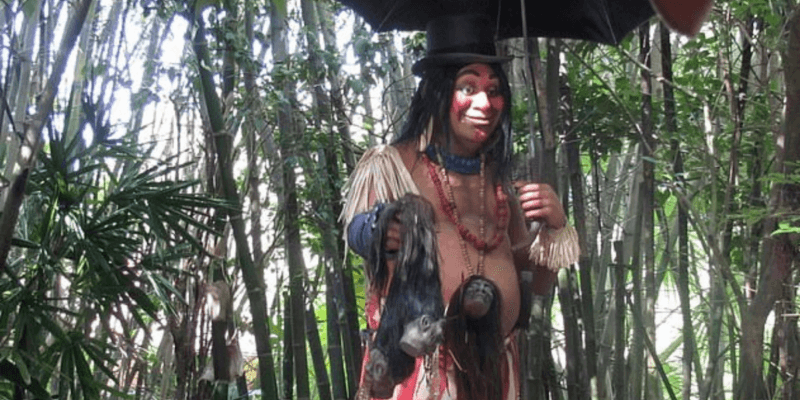 With the impending renovations to Disney’s exotic Jungle Cruise attraction, the much-needed reimagining is upon us. “Casting off” from both east and west coasts, the theme park ride will be digging deeper into its own punny backstory with a less problematic depiction of specific characters and the addition of some fun scenes.

But as this reimagining begins (and the Disney World attraction will remain open during the work) we’ve noticed that Walt Disney World Resort’s Trader Sam had completely been removed from his post.

Please… stay seated and remain in the boat as we discuss the possible future of Trader Sam.

The reimagining digest we got from the Disney Parks Blog discussed a new, yet related storyline of a Skipper’s Cruise gone wrong that will weave throughout the reimagined Adventureland attraction. We have seen concept art of monkeys taking over a Jungle Cruise Skipper’s vessel as well as new adventurers that will climb the charging rhino’s pole.

What wasn’t depicted in the shared concept art was any of the refurbished natives (which do need attention!). This obviously would include Trader Sam, who is a native himself but has an extremely different look from coast to coast.

D23 discussed these same changes and was quoted:

It’s the Jungle Cruise you know and love, with the skippers still leading the way, and at the same time, we’re addressing the negative depictions of “natives.” So that’s one of the scenes we’re going to go in and change.

Despite this evident warning, so many Disney World Guests were surprised to see Trader Sam completely removed from his (literal) post this week, and a camouflage net in his place.

Twitter user @HippyDisneyGuy, going by the nickname “DisneyDoItAll!” posted a photo from their Jungle Cruise ride which wrote:

The net would obviously serve to hide his animatronic base, but the fact that it was not/has not yet been demolished makes us hopeful for his return… but what would that look like?

Being that both of the cocktail lounges are named after Trader Sam, it should go as no surprise if he reappears in different garments (and perhaps a completely different appearance) as a Purveyor of Spirits.

This rum salesman could have several strong jokes about his liquor… it’s at least worth a shot! Picture your Skipper pausing at Trader Sam’s corner for an intoxicating mix of humor. It will never be a pour decision to listen to his jokes, and if you don’t like them, we don’t want to hear you wine about it.

It would also be incredible publicity for the only Imagineer-designed lounge at Walt Disney World or Disneyland Resort. Many Disney Guests don’t know that Trader Sam’s lounges exist or that it’s just as magical as the Disney SEA Society members make it out to be!

If alcohol is out of the mix, then perhaps Trader Sam’s name takes a little more of the lead? It might be a Big Summer Blowout but a Trading Post in the middle of the Jungle certainly would come in handy. We understand how this might disappoint some Disney fans (Once you’ve seen a shopping center, then you’ve seen a mall), but these Skippers have their jokes in the bag.

If Trader Sam reappeared as the manager of a shopping post, there certainly would be a lot of fun in store. I can just hear the Skippers discussing his famous discounts but over a more appropriate setting. “I went to buy some camouflage trousers from Trader Sam the other day, but I couldn’t find any…”

There is always the possibility that Trader Sam may face permanent eviction from the Jungle Cruise ride. Aside from the famous backside of water pun, he is one of the more treasured sets of punny jokes on the attraction, which makes us think he may reappear in another form.

If Sam doesn’t return to the ride, something else may take his place. While we don’t know the specifics of the new storyline that will be set upon The Jungle Cruise, we may have to wait and see what emphasis (or ending, seeing that Trader Sam was always the last stop) is required by the narrative.

Please keep in mind Disney has not confirmed what will happen with Trader Sam but Inside the Magic will keep you updated as we get information.

Leave us a comment with your thoughts on how Trader Sam may look if he reappears in the attraction!