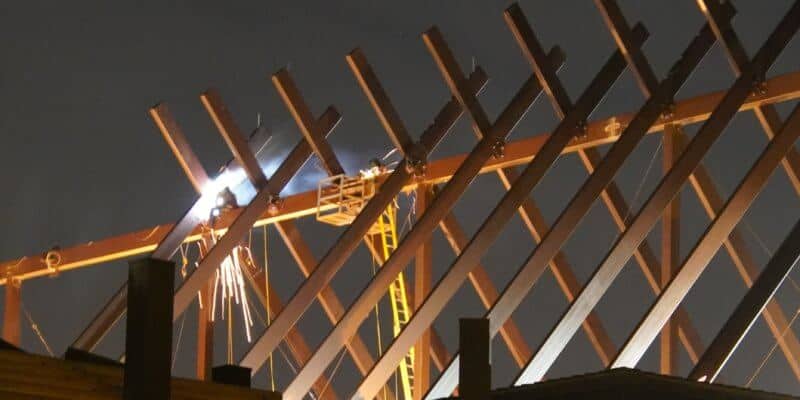 On December 3, insider @bioreconstruct captured some footage of the night shift hard at work atop one of the Poly’s most iconic structures, the Great Ceremonial House.

He shared a video, noting: “sparks fly above Great Ceremonial House from welding and grinding. New cross beams are being installed, at Disney’s Polynesian Resort.”

Here is a close-up photo of the welder hard at work:

We at Inside the Magic previously reported sightings of the old cross beams being removed — also provided by bioreconstruct — back in October. Now, it appears the installation of new ones is finally well underway.

The replacement of the towering cross beams above this Disney Resort hotel’s lobby is just one of the several projects currently underway. Most notably, Disney is retheming resort rooms after Walt Disney Animation’s feature film Moana as well as refurbishing the interior lobby and monorail station.

This news follows reports that rooms at the Polynesian have begun to be cleared in preparation for the retheme, including those in the Fiji Tower, Tuvalu Tower, Aotearoa Tower.

Read More: PHOTOS: Gutted Rooms at the Polynesian as Renovations are Underway

Currently, due to this construction, only the Disney Vacation Club villas (not regular rooms) are available for Guests at this time. Because of the monorail closure, those DVC Guests must take a bus or newly-returned watercraft to the parks. However, some dining options are still open — so you can still get Tonga Toast at Kona Cafe or a Dole Whip at Pineapple Lanai.

Disney’s Polynesian Village Resort is expected to remain closed for refurbishment until the Summer of 2021. Be sure to subscribe and stay tuned to Inside the Magic as we continue to bring you the latest updates on this beloved monorail resort’s renovations!

Planning your 2021 Walt Disney World Resort vacation? Our friends at Academy Travel are standing by ready to help you make this next visit as magical as possible. Click here to learn more and to receive your free, no-obligation quote today!

Are you excited about the Poly’s renovations? Where does it rank among your favorite Walt Disney World Resort Hotels? Let us know in the comments!