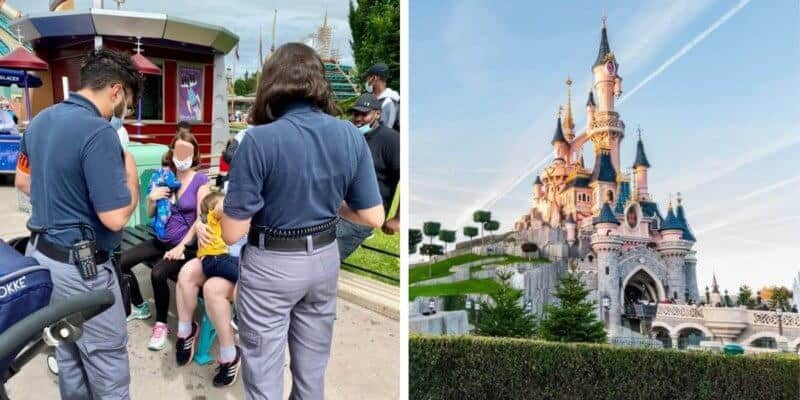 Going to any Disney Park on your own can often be a struggle as there is so much to navigate and so much to do! Going with your kids is an even bigger challenge as you are responsible for your children and ensuring they have a safe and magical day.

Of course, a Disney Park is the Happiest Place on Earth, made for families and people of all ages. All Disney Parks welcome children of all ages to enjoy their day at the theme park, but often the youngest Guests require a little extra care, just as they do outside the theme park. Many parents bring their babies and small children to the theme parks, and sometimes choose to breastfeed them during their visit, especially if breastfeeding is part of the child’s normal routine. When Guests visit Walt Disney World Resort in Florida or Disneyland Resort in California,they do not have to worry about breastfeeding in public if that is something they choose to do.

Although there are Baby Care Centers at the theme parks which offer private breastfeeding rooms, both Disney Parks in the U.S. are breastfeeding-friendly. For example, the Walt Disney World Plan Disney site notes:

You will be very happy to hEAR that the Walt Disney World Resort is breastfeeding-friendly! Therefore, you may nurse your infant child freely throughout the Resort. However, you’ll also find convenient Baby Care Centers for mothers looking to nurse in a more private and relaxing setting.

But according to a recent Guest experience, breastfeeding in public at Disneyland Paris can get a little more tricky.

Mareeastier (@marieeastier) posted a Tweet showcasing two security guards telling a mother she could not breastfeed her child in public. Below is the English translation and photo of the incident.

Yesterday your security guards prevented a mother from breastfeeding her 2 month old baby on the grounds that it shocked foreign customers! In France, in July 2021!
Obstruction of breastfeeding, where are we?
@FionaLazaar @MarleneSchiappa

The Tweet has already garnered over 1.7 thousand likes and a long thread of Disney fans and Guests alike very upset about the incident. The Tweet also tagged Fiona Lazaar, French National Assembly Member, who has tabled a bill to prevent incidents like this from ever occurring in France. Lazaar (@FionaLazaar) even responded to the Tweet with a photo of a letter she wrote to the Disneyland Paris President.

Following this report, my letter today to the president @DisneylandParis If this situation is confirmed, it is serious. Every woman should be able to feed her child as and where she wants. This is the meaning of the bill I tabled.

In response to the Tweet, Disneyland Paris (@DisneylandParis) replied that Baby Care Centers are available for breastfeeding but never mentioned they were breastfeeding friendly as Disney World in Florida or Disneyland in California do.

Hello, Disneyland Paris provides mothers with the BABY CARE CENTER with suitable and comfortable equipment such as special breastfeeding seats

As we mentioned, the Twitter thread flooded with comments of support to the breastfeeding mother. One example comes from Eh’Mdam (@EhMdam), who noted:

I’m dreaming … it’s rubbish. What do they suggest, suddenly, that we let the baby starve? Just because there are people who don’t know how to look elsewhere? (tip, if you see the breast while there is the baby’s head in front, you are looking too closely …)

Responding to the messages, on which the French government was copied, Disneyland said Tuesday it “profoundly regrets this situation and present once more our apologies to the mother in question”.

The agents’ actions were “not compatible with our regulations and our values”, it said, insisting “there is no restriction on breastfeeding at Disneyland Paris”.

It also added that it offered “different places” at the site “for those who prefer a dedicated place” to nurse their children.

The response is interesting, considering that Disneyland Paris noted that the incident was a mistake on their part. Still, the Twitter response highlighted that mothers should go to the Baby Care Center to breastfeed their children, according to the rules and regulations.

When looking up Disneyland Paris’s rules for breastfeeding, the search result begins to describe what seems to be the theme park’s stance, discussing the Baby Care Centers on property.

However, when you click on the link or search for breastfeeding on the website, nothing is currently listed at the time of the publication of this article. Perhaps Disneyland Paris is in the middle of amending their wording regarding the subject on their website, though this has not yet been confirmed.

Although Disney noted that “there is no restriction on breastfeeding at Disneyland Paris,” it seems that there may be, according to the actions that were taken at the park and the Twitter response presented. Guests looking to breastfeed at the parks can ask a Cast Member for assistance to find the nearest Baby Care Center.