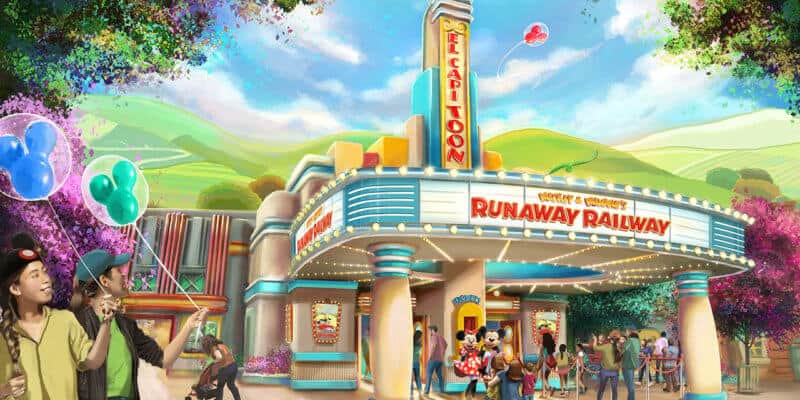 In 2019, Disney announced that they would be bringing a new ride to Disneyland Resort, and it would feature the mouse who started it all, Mickey! The ride would be called Mickey and Minnie’s Runaway Railway, and at the time it was announced that it would open in 2022. Disney Parks Blog wrote:

Unfortunately, when the COVID-19 pandemic hit, construction had to pause and the ride’s opening has now been delayed until 2023. However, construction has since resumed on Runaway Railway and Disney Parks has shared a video update on TikTok!

As can be seen in the video, a large construction building has gone up behind an Instragram-worthy wall in Mickey’s Toontown, where Runaway Railway will open at Disneyland Park. Before the construction began, some of the hills of Toontown were removed and this door was painted.

Disneyland Resort President Ken Potrock also shared construction that was happening on the Runaway Railway before the theme parks closed down. Potrock posted on Instagram:

I am thrilled to share my “Happiest View on Earth” with you today, a special peek outside a window at our Team Disney Anaheim building. This particular view offers a behind-the-magic look at a momentous milestone that happened today at @Disneyland park – the first steel beam has been placed for what will be the future Mickey & Minnie’s Runaway Railway attraction, scheduled to open for guests in 2023! Swipe and take a look!
#RunawayRailway

When Potrock shared this post, the theme parks were closed, but construction was allowed to resume as long as crews followed COVID-19 safety procedures.

Mickey and Minnie’s Runaway Railway in Disneyland will be the attraction’s second location in the U.S. Runaway Railway opened in March 2020 in Disney’s Hollywood Studios. The new attraction took the place of what was The Great Movie Ride and is located at the replica of the famous Grauman’s Chinese Theater.

Construction of Mickey and Minnie’s Runaway Railway in Disneyland has been happening for the past several months with no Guests in the theme park. That will change when the theme park reopens on April 30. It will be exciting to be a part of the magic and see the construction move along while taking in the other aspects of Mickey’s Toontown. We just wish we didn’t have to wait until 2023 to ride it!

Are you excited for Mickey and Minnie’s Runaway Railway to come to Disneyland Resort? Let us know!

CLICK HERE to get started booking your Disney vacation with Academy Travel today!