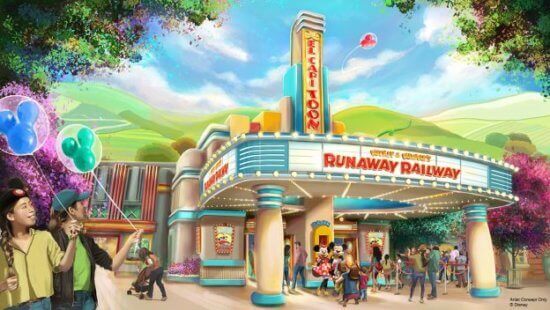 Disneyland has been open since 1955, and there has never been a ride themed after the park’s iconic character and Walt Disney’s best pal, Mickey Mouse.

In just a few years, Mickey will get his very own attraction at the Happiest Place on Earth: Mickey & Minnie’s Runaway Railway. The ride won’t open for quite some time, but since it is set to be located in Mickey’s Toontown, it has us thinking — is Disney planning to reimagine Toontown to usher in a new generation of Mickey fans?

Here, we discuss the plans for the new Mickey-themed ride-through attraction at Disneyland — and why it might be a good idea for other changes to come to Toontown.

Back in 2019, Disney Parks Blog announced that Mickey & Minnie’s Runaway Railway will be coming to Disneyland Resort:

The last update that Disney provided on the new Mickey Mouse-themed attraction stated that Mickey & Minnie’s Runaway Railway will debut at Disneyland Park in 2023. Amid the project delays as a result of the ongoing pandemic, Disney announced that Mickey & Minnie’s Runaway Railway will open one year later than planned, though an exact opening date has not yet been revealed.

Why the New Mickey Mouse Ride Could Change Toontown

Currently, Mickey’s Toontown at Disneyland Park is a hub for toddlers and small children. This “topsy-turvy, quirky” world is where you will find Mickey’s House, Minnie’s House, Donald’s Boat, Chip ‘n Dale Treehouse, and Goofy’s Playhouse — and where you can meet the Fab Five on a typical Disneyland day. The only two rides in this area of the park are Gadget’s Go Coaster and Roger Rabbit’s Car Toon Spin. So, there is a chance that when Mickey & Minnie’s Runaway Railway opens — with all of the new technology the ride employs — the other rides in the land will feel more outdated than they do currently.

Given this, it might make sense for Disney to reimagine Toontown.

Mickey & Minnie’s Runaway Railway is an expansion of the current Toontown area in the original California Disney Park. Because of this, the addition of the attraction will not be taking away from the current land, but rather adding to it. But although it is highly appropriate for Mickey’s first ride-through attraction in Disneyland to be located in the very land where his house is located, the new ride may prompt Disney to change the land in more ways than one. Or, perhaps, Disney has already decided to do so.

If Disneyland were to reimagine Toontown, it would not be the first time. We have seen the area at Magic Kingdom at Walt Disney World in Florida go through several iterations before the most recent Storybook Circus. Now, we don’t expect Disneyland to change Toontown altogether. In fact, it’s clear from the concept art that the Disneyland version of the ride fits right into the current theme of Toontown.

However, there is a chance that Disney may want to make some changes to the other attractions within the land. Perhaps the company will retheme Gadget’s Go Coaster, often the first roller coaster for small children at Disneyland. There’s a chance Disney will decide to reimagine the attraction to fit the theme of the new Mickey Mouse cartoons so that it fits more closely with the new attraction, Mickey & Minnie’s Runaway Railway.

On the other hand, the California Disney theme park attraction Roger Rabbit’s Car Toon Spin has been due for an upgrade or retheme for some time now. Though there are many attractions in Disneyland Park that are themed after Disney films of the past, Who Framed Roger Rabbit? isn’t necessarily the most beloved Disney classic (and the film isn’t as widely considered to be kid-friendly as Mickey Mouse cartoons). Perhaps Disney will decide to scrap the attraction altogether to make way for something new. There are plenty Disney fans who wouldn’t welcome the change, but there are others who would agree that it might make sense for Disney to use Mickey & Minnie’s Runaway Railway to welcome a new generation of Mickey Mouse fans — and as a way to push out 1994 Roger Rabbit attraction that is almost as old as Toontown itself.

So far, there is no word from Disney regarding the future of Toontown. We expect to see Mickey & Minnie’s Runaway Railway in less than three years (construction continues to progress!) but that’s all we officially know about what’s coming soon to this area of Disneyland Park. As soon as Disney provides another update — and if the company gives an indication of what the future holds for Toontown — we’ll be sure to update Inside the Magic.

What do you think? Does Mickey & Minnie’s Runaway Railway indicate that Mickey’s Toontown has a bright future at Disneyland? Would you like to see any other changes take place in this land? Let us know in the comments.