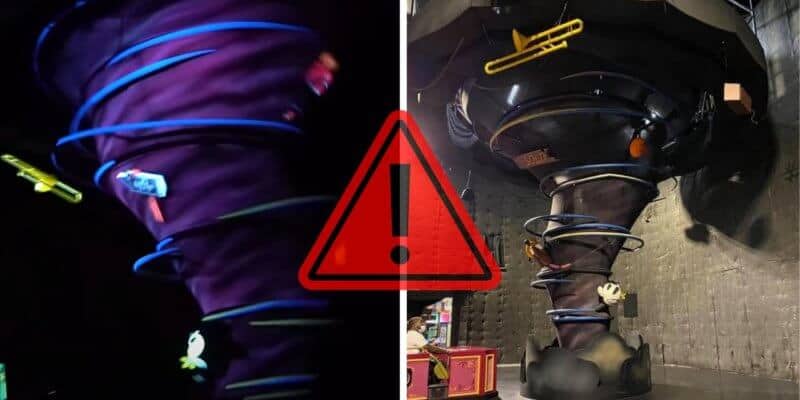 Whenever you hop on a Disney attraction, you likely think you know what to expect in terms of knowing what is going to happen while you are on the ride, but rides can break down, and things don’t always go as planned.

Mickey and Minnie’s Runaway Railway is the most recent attraction to debut at Disney’s Hollywood Studios. Although it might not break down as often as Star Wars: Rise of the Resistance in the Star Wars: Galaxy’s Edge land, things still occasionally go wrong, and sometimes Guests get a different train ride while they are on their way to their picnic.

The Ronenverse | Runaway Railway Simp (@TheRonenverse2) released a photo on Twitter of what the attraction looks like when the lights are on. For most scenes, the lights turning on may not be too remarkable since nothing is really hiding from you, unless the lights going on meant the projections stop — in which case, that would be pretty cool to see.

However, below we can see what the twister scene looks like in Mickey and Minnie’s Runaway Railway when the lights are up! Considering this is a very low lit scene that relies on the darkness to achieve it’s effects, turning the lights on really changes the perspective of what you are looking at.

Here’s a look at the Twister scene from Runaway Railway with the lights on!

Credit for pic goes to Hozay Familia on Facebook! pic.twitter.com/6So3GlJDKg

Personally, if I had to have this attraction stop and have lights turned on at any moment, I would choose the twister scene. As we just discussed, it is the only scene that really plays best in darkness, so turning the lights on would be the starkest contrast, but there are also so many ‘Easter eggs’ hidden in the spinning cyclone, that when — combined with the dark — you can easily miss.

Running through the attraction once you many notice that Mickey Mouse and Pluto are both present in the twister, but there is so much more to it than that! First off, Mickey and Minnie’s Runaway Railway has a B-plot going on the whole time, which is that Pluto is constantly trying to catch up with Mickey and Minnie because they forgot their picnic basket. Explaining the whole thing is a separate article in itself, but here we can see then he is holding the picnic basket while trying to save the sausages and get it to Mickey.

There are also musical instruments present in this scene, which is a call to Mickey’s PhilharMagic, where there is a tornado of instruments flying. It seems our pal Mickey just can’t leave his orchestra behind! We also need to take a look at the location of this scene and what went on here during The Great Movie Ride. This was a Fantasia section, a film which also displayed the use of instruments, so the ‘Easter egg’ may very well cater to both attractions. Once Guests left this section of the extinct attraction, they headed into The Wizard of Oz section. Prior to entering, Imagineers wanted to create a twister scene where the Fantasia display ended up being, but due to budget, it didn’t happen in the way they had originally planned.

Thanks to head Imagineer on Mickey and Minnie’s Runaway Railway, The Great Movie Ride got it’s twister scene in the right location in the end! You also can see some odes to The Wizard of Oz, including Dorthy’s house spinning at the top of the tornado, and a mailbox within the twister that reads “No Place like Home”.

With the lights on, Guests would likely be able to pick up on a whole lot more of these ‘Easter eggs’, but when the ride is actively spinning in the dark, you are lucky if you can catch any without knowing to look for it.

Want to try and find more easter eggs on the attraction? Watch our POV here:

What ‘Easter eggs’ have you noticed on Mickey and Minnie’s Runaway Railway? Have you ever had the attraction break while you rode?