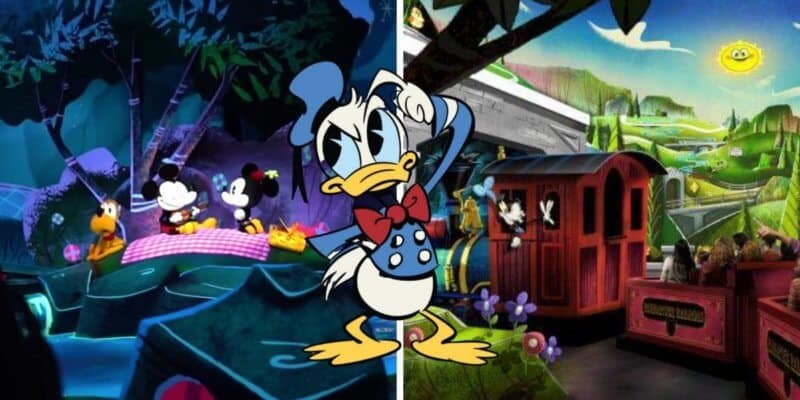 This is the first ever Disney theme park attraction that is based around Mickey Mouse himself! In case you haven’t yet had the chance to ride, guests will enter the Chinese Theater, which will serve as “the magic portal”, they will instantly be fully emerged into Mickey’s Toontown.

Mickey and Minnie’s Runaway Railway is a trackless theme park ride that features effects and sounds like no other Disney attraction. As you can imagine, the technology is extremely important in order for the ride to run correctly. Well, one YouTuber posted a video of them riding Mickey and Minnie’s Runaway Railway for the first time — with no effects, animations, or sound! Check it out below.

As you can see, none of the effects or background music plays as the Guests ride through the different scenes of the attraction. For comparison, if you want to ride the attraction with all of the functions working correctly, check out our POV video here.

Based on the recent award-winning Mickey Mouse cartoon shorts, Mickey and Minnie’s Runaway Railway is a brand-new attraction unique to Walt Disney World Resort and Disney’s Hollywood Studios—and the first ride at any Disney park that stars Mickey Mouse and friends.

Have you ever ridden Mickey and Minnie’s Runaway Railway? Let us know in the comments below.