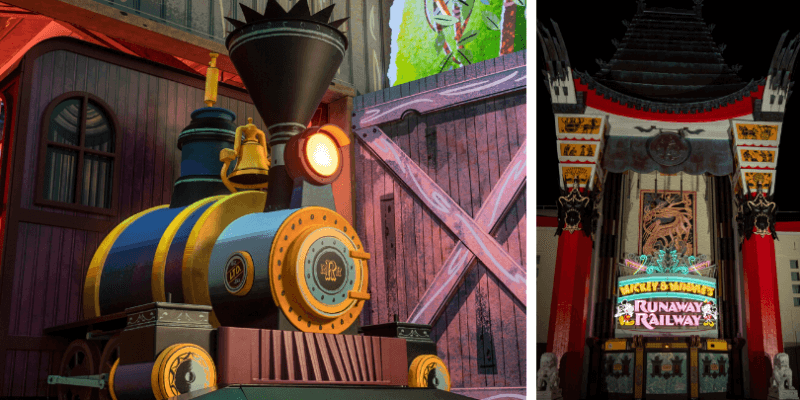 “Gawrsh! They’re with me! What could possibly go wrong?” -Goofy

Mickey and Minnie’s Runaway Railway is set to open at Disney’s Hollywood Studios on March 4, 2020 and just when we couldn’t get more excited, Disney released a special sneak peek.

Check it out (but if you want to ride the attraction spoiler-free, here’s your spoiler warning!):

The Experience We See So Far

So guests will walk through the main theater entrance, under the brand new marquee. Then guests will be guided through past a poster for the latest short “Mickey Mouse in Perfect Picnic.” Guests then board a train to go off with Mickey and Minnie with Goofy driving the train.

The sneak peek gives us a big of dialogue. Mickey and Minnie drive up next to our train and we can see Goofy in the cab upfront.

Goofy replies, “Gawrsh! They’re with me! What could possibly go wrong.”

The video cuts right after that. Never has such a goofy silly voice said something so ominous, leaving every Disniac hanging and dying to get on the ride. Luckily, we only have to wait five more days before we get to ride it.

You don’t need to be an Imagineer to recognize that Disney’s Hollywood Studios park is going through some major changes. One of the biggest changes–outside of the inclusion of Star Wars: Galaxy’s Edge–was the transformation of the Chinese Theater replica. Originally hosting “The Great Movie Ride” which took you through some of the greatest movies of all time. Now, it is home to a Mickey Mouse ride.

But Walt Disney Imagineers were able to work the theater perfectly into the changing park. You will still be immersed in a piece of movie magic, and what better place to do it than inside the legendary Grauman’s Chinese Theater? It’s a modern twist on the golden age when people would go to the theater to see a Mickey Mouse cartoon which speaks volumes to the timelessness that we get from Mickey Mouse and Disney’s classic Fab Five.

As part of a historic multiyear transformation, the Walt Disney World Resort theme park has unveiled a years-long string of smash hits that would make any movie studio jealous, inviting guests inside some of their favorite stories. Now a new family-friendly adventure is about to begin as Mickey & Minnie’s Runaway Railway readies its grand premiere, March 4, 2020, inside the park’s re-creation of the Chinese Theatre.

Mickey & Minnie’s Runaway Railway is the next milestone in this transformation, bringing guests into the wacky world of a “Mickey Mouse” cartoon where “mouse rules apply” and anything can happen. The vibrant attraction adds to the array of immersive new experiences propelling Disney’s Hollywood Studios into the future.

Mickey and Minnie’s Runaway Railway opens to the public on Wednesday, March 4, 2020.

Book a trip to Disney World with Academy Travel to experience Mickey and Minnie’s Runaway Railway in person!