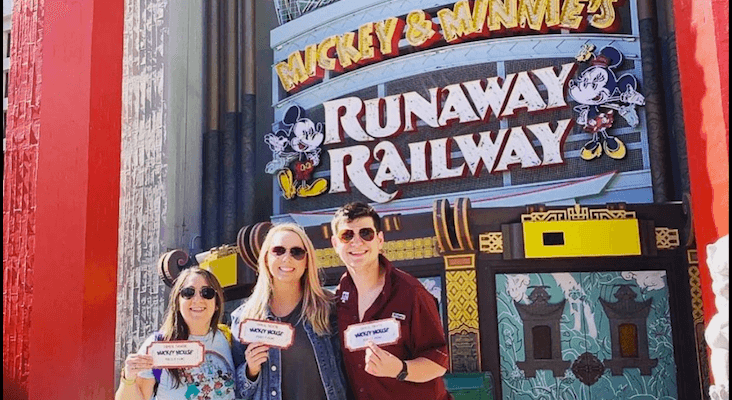 Cast Previews for Mickey and Minnie’s Runaway Railway at Disney’s Hollywood Studios began today. First impressions of the new attraction, which opens on March 4th, have begun appearing online from Cast Members. Check out what they had to share about the attraction!

I officially did it! Better than The Great Movie Ride! #DisneyCastLife pic.twitter.com/88UT8yBI3t

Cast Members pose for photos outside of the attraction with small keepsakes that seem to resemble train tickets. “Mickey Mouse” can be seen in bold blue on the front of the tickets.

Online tweets from Cast Members describe the attraction as “A lot better than I had anticipated.”In addition to the actual attraction being engaging, it appears that the queue/show before the ride will also introduce guests to the story in an engaging way.

First impression: A lot better than I had anticipated, there is a LOT going on in this attraction. As a dark ride it does it very well and keeps the story engaging.

As far as the queue/show I was quite surprised of how it introduces you to the story. (1/2)

I RODE MICKEY & MINNIE’S RUNAWAY RAILWAY THIS MORNING AND IT WAS AMAZING!!!! I’m so excited for everyone to experience it! pic.twitter.com/Fuoz7W8xrO

We are so excited for this attraction to open publicly to guests in less than two weeks. Disney has been keeping us updated on what to expect in this new, immersive attraction. It will apparently feature many “historical nods and easter eggs”, as well as featuring two main storylines for guests to follow along with.

This attraction is receiving lots of attention because it is considered Mickey and Minnie’s first actual attraction at any of the parks. It is inspired by new Mickey Mouse cartoon shorts, as seen on Disney Channel and streaming on Disney+.

Are you excited for this new attraction to open at Disney’s Hollywood Studios? What more would you like to know from the Mickey and Minnie’s Runaway Railway previews? Let us know in the comments below!