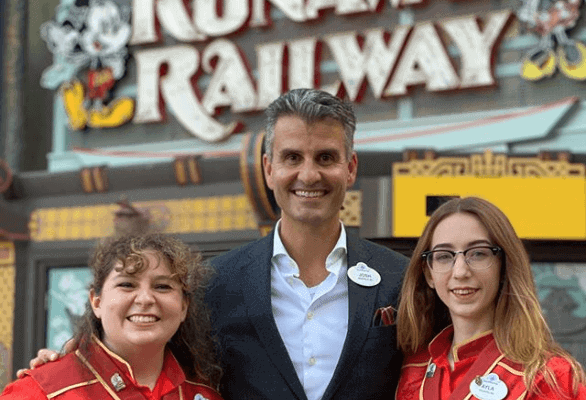 Disney’s Hollywood Studios is gearing up for the Grand Opening of Mickey and Minnie’s Runaway Railway and Walt Disney World Cast Members are excited — especially the President of Walt Disney World, Josh D’Amaro.

After having his own sneak peek at the new attraction, which apparently included some intense ride operation training, D’Amaro posted a video to his social media crediting the amazing cast members for this attraction and promising all Walt Disney World Cast Members that they will get to experience the ride before anybody else. The exact date and time of the preview are yet to be announced.

In the video, D’Amaro is joined by two lucky Cast Members already trained on the new attraction, Rachel and Ayla. All signs point to this video being a very impromptu announcement. Judging by the sound quality and the reactions of the Cast Members, and D’Amaro himself has a very genuine look on his face and timbre in his voice. This speaks volumes to the fact that all Cast Members at every level enjoy releasing fun, wish-granting spontaneity into their work, and it is also another beautiful example of the kind of leader D’Amaro wants to be at Walt Disney World.

This is an especially wonderful opportunity for Cast Members who have been blocked out of Disney’s Hollywood Studios and have had a difficult time getting to experience the all-new Star Wars: Rise of the Resistance attraction at Star Wars: Galaxy’s Edge.

What a great night in Magic Kingdom honoring so many of our incredible Cast Members who are celebrating milestone service anniversaries this year!

Josh D’Amaro is still relatively new to his position at Walt Disney World, taking on the role in Fall 2019 after transferring from the Disneyland Resort in Anaheim, California. According to his profile on Disney’s Parks, Experiences, and Products website, Josh D’Amaro finds himself in charge of more than 75,000 Cast Members across Walt Disney World–the largest single-site workforce in America–and he is striving to take care of his Cast Members in a way they deserve.

Josh believes that, by being a champion for the resort’s cast members, an active member of the community and an advocate for innovation, Walt Disney World Resort will continue to thrive as a business while delivering the magical guest experiences for which it is known worldwide.

But actions speak louder than words and D’Amaro has done more than this ride announcement. A simple scan of his Instagram page will show how he tries to get out into the parks and genuinely connect with Cast Members at every level. And he made headlines after dedicating millions of dollars to improving the “backstage” workplace experience while also continuing attraction developments from Star Wars: Rise of the Resistance to the new Skyliner. You can read our coverage of that story by clicking the link below:

Hopefully, D’Amaro can fulfill his mission to set priorities straight and ensure Walt Disney World tends to its Cast Members just as intensely as it does for the newest and latest attractions.

What do you think of the moves Josh D’Amaro is making at Walt Disney World? Do you know any Cast Members who have had the chance to meet him? Let us know in the comments!