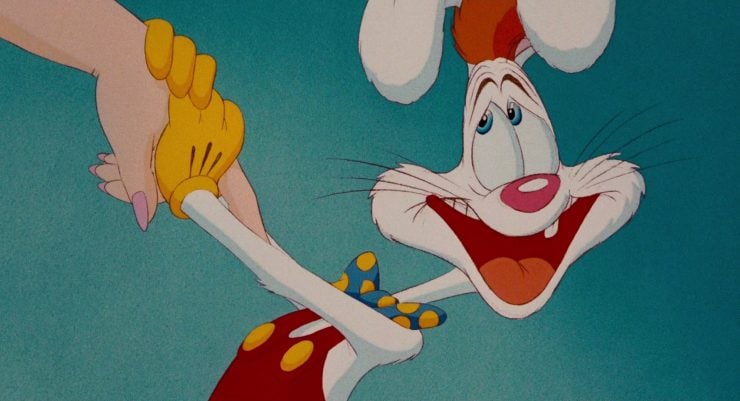 Okay, I know what you’re thinking… But Ryan, the Disney Renaissance period didn’t start until 1989 and Who Framed Roger Rabbit was released in 1988 and it’s a term that is solely applied to animation. I know, but stick with me and let me explain.

Firstly, so many of you reached out to me after I wrote my piece on why I believe Bedknobs and Broomsticks as the best live-action Disney classic to inquire why I hadn’t even mentioned Roger Rabbit. It’s simple: I put Roger Rabbit into a slightly later bracket of films.

he movTie clearly doesn’t fit well with the recent live-action remakes such as The Lion King, The Jungle Book, and Cinderela, and I think we can all agree that Who Framed Roger Rabbit from director Robert Zemeckis doesn’t deserve to sit in the “Dark Age” of Disney. With all of that in mind, I am making the film the catalyst for what would become the Disney Renaissance.

Roger Rabbit was the start of something great for Disney Animation

By the time 1988 came around, Walt Disney Animation was at a breaking point. After several films had failed to capture the magic in the same way the earlier classics had done, Disney needed to change and change fast.

While it is 1989’s The Little Mermaid that is largely contributed as the film to begin the Disney Renaissance phase of animation, it’s really the work from the team on Who Framed Roger Rabbit that kick-started this phase.

This huge spark of creativity helped to inspire animators over the next 10 years to work on greats such as The Lion King, Aladdin, Beauty and the Beast, Hercules, and Mulan.

An ensemble of characters to rival Avengers: Endgame

The movie had a huge selection of animated memorable characters both from Disney and other animated greats. This rivals what we saw in Avengers: Endgame. Don’t believe me? On top of original characters like Roger, Jessica Rabbit, and Benny the Cab, here are just some of the famous cartoons that were featured in the movie:

This is nowhere near the entire cast of toons included in the final film. Just how they managed to pull this off still astounds me to this day.

Now I am not downplaying any of the other fantastic cast who appeared in the movie but my word, what standout performances from both Christopher Lloyd (Doom) and the late Bob Hoskins (Valiant). I remember being terrified of Judge Doom as a kid and what a performance from Bob Hoskins who you truly believed had been through a terrible time through the loss of his brother throughout the movie.

To be able to insert such a tragic story into a film filled with cartoons is incredible and Bob Hoskins and Christopher Lloyd were perfectly cast.

The perfection of live action and animation working together

I know I referenced how well the live action and animation worked together in my piece on Bedknobs and Broomsticks, but Who Framed Roger Rabbit really does take things to the next level. The animators worked tirelessly on this movie to make sure that every detail was believable, the visual effects were stunning. In fact, the film won many awards including an Academy Award for best visual effects, much of this thanks to animator Richard Williams.

An example of this is the swinging lamp scene, where it would have been fine for Roger to stay flatly illuminated throughout the entire scene. The animators manually hand-shaded each and every cell to create realistic shadows.

The term “Bumping the Lamp” was coined by Disney animators during the creation of the movie. Work like this made the cartoon and human interaction seamless, allowing for a world where it was believable to see the two together.

One of my favorite parts of the movie that I learned recently when watching Prop Culture on Disney+ is the subtle work they did to put doubt in Judge Doom being a human. Next time you watch the movie you will pick-up on it, look for his cape moving when nothing else in the room is (almost like it has a life of its own) and the glint from his glasses in a couple of the scenes.

Of course, a lot of the credit also has to go to the voice of Roger Rabbit, Charles Fleischer, who would turn up on set dressed as Roger Rabbit to deliver his lines. This in combination with visual prompts meant that actors would be looking at the exact point where animators would come in and animate the characters in afterwards.

We’re unlikely to see anything like this ever again

This is the only time a Disney and Warner Bros character have appeared together on film. Can you imagine this happening again in our lifetimes? Let alone getting all the giants of Hollywood outside of Disney and Warner to agree to have characters appearing in a film.

Spielberg’s Ready Player One is perhaps a recent equivalent of a movie that managed to pack so many different characters and franchises in a single film but nothing has quite captured the wonder of Who Framed Roger Rabbit since and of course, Ready Player One wasn’t unique to animation.

There’s been talk of a sequel happening for years, but given we are now over 30 years from the original release of the movie, it just doesn’t feel likely. It’s a real shame because there was so much potential in the 40s setting and the world of Toontown that it could have easily become a franchise for Disney into the 90s. Who’d have thought a cartoon rabbit could leave just a lasting impression on the world?

Are you a fan of Who Framed Roger Rabbit? Do you think it is deserving of the title I’ve given it? Let us know in the comments below!