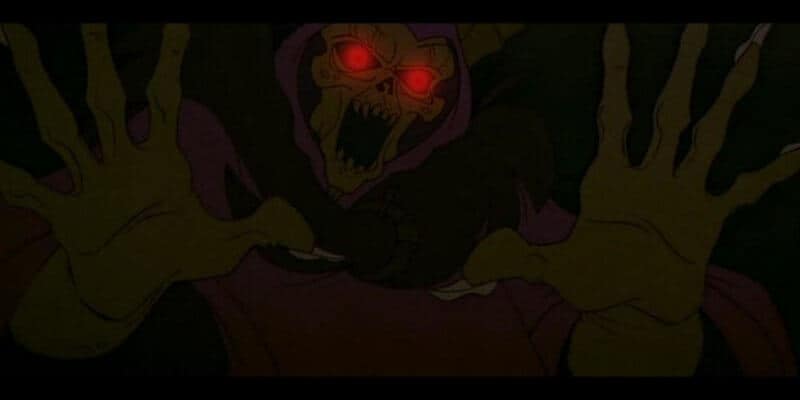 Disney; the happiest place on earth. Right? When we think of classic Disney movies, we’re usually filled with happy memories of joy, laughter, and heart-warming moments. Yet, for every magic kiss with Cinderella, there’s a brutal assassination of Bambi’s mom.
With a firm grasp on our heartstrings, Walt Disney movies know how to play with our emotions, and fear and disgust are no exceptions. Far from the safety of the Magic Kingdom, here are our picks for five of the most devastatingly dark movie moments in Walt Disney film history.

5. Hellfire – The Hunchback of Notre Dame

When you adapt the work of Victor Hugo, you know you’re probably getting into some dark territory, especially for an animated kids movie. While Disney’s Hunchback of Notre Dame does water down most of the grimmer story beats, there’s one character who’s just as heartless, gross, and downright evil as he is in the novel; Judge Claude Frollo. This guy ranks up there as one of the best Disney villains ever put to screen, exemplified by his wonderfully sinister musical theatre ballad; Hellfire.
Riddled with frightening iconography and themes of murder and lust, this is one Disney song that toes the line of what’s acceptable for kids. It also helps that it’s a total banger, with incredible orchestrations by Alan Menken and an epic backing choir. Still, a Disney film with the word ‘hell’ in the title is pretty Out There. Luckily, we have these clowns to keep the little ones distracted.

Related: Live-action “Hunchback of Notre Dame” movie in the works at Disney

4. A Night on Bald Mountain – Fantasia

Walt Disney’s third animated classic Fantasia still holds up as a pioneer of animated filmmaking. Combining classical music with the charm of characters like Mickey Mouse was a genius move, and these archaic music videos remain some of the greatest animated content ever put to screen. They’re all fairly tame, playful even, and filled with tales of whimsy and magic. And then you get to A Night on Bald Mountain. With the devil himself at the helm (alright, it’s Chernabog, but it’s close enough), how could it not be utterly petrifying?
The king of the Disney Villains takes over for a legendary segment that’s been scaring audiences for eighty years. This terrifying short animated film uses a horrific colour palette and disturbing demonic imagery to cement itself as a dark (and excellent) bit of Disney history.

Probably the closest in tone to the Brothers Grimm fairy tales of old, Pinocchio is a pretty dark Disney movie all over. From the nasty Stromboli the Puppet Master, to the intense encounter with the whale, this early Disney story fully embraces its macabre source material. However, there’s no moment scarier than the visit to Pleasure Island, which reveals the tale‘s true colours as a dark cautionary fable.
After the boys commit the sins of smoking, drinking, and vandalism, their transformation into donkeys remains one of the most horrifying moments in a Disney animated film to date. As Pinocchio’s friend Lampwick begs for his mother, his cries turn to desperate donkey gasps and we get a severe case of the willies. Oh, and to top it all off, we never see any of the boys released. Where’s that magic happy ending for these blokes? Thank goodness for Jiminy Cricket, that’s all I can say.

Related: Director of “Back to the Future” in talks with Disney for “Pinocchio” remake

Alright, so perhaps The Black Cauldron isn’t the greatest Disney film (or is it an underrated classic? We’ll leave you to thrash that one out in the comments). However, you can’t deny that its horror aesthetic offers striking visuals that give it a grim character of its own. This classy supernatural tale embraces its horrendous genre as the villainous Horned King literally RAISES THE CORPSES OF THE DEAD. The happiest place on Earth? Are we sure? The haunting vocal performance of John Hurt, the spine-chilling soundtrack, and the otherworldly visuals combine to craft a dreadfully spooky scene.
Let’s just take solace in the fact that Disney decided these deleted scenes of the Cauldron Born literally melting the flesh of the living was that bit too disturbing. At least The Black Cauldron famously tanked at the box office, or we’d likely get the displeasure of this horrific scene in live-action in the near future.

Related: Disney will close Haunted Mansion in 2020 for extended refurbishment

Though probably not a moment that had kids bursting into tears like say, a certain death in The Lion King, the ‘shoe dip’ scene is undeniably the most disturbing moment in any Disney movie, just for how visceral it is. Christopher Lloyd’s unnerving (and brilliant) Disney villain Judge Doom proves just what a messed-up dude he is by taking an innocent, fully sentient cartoon shoe and SLOWLY MURDERS IT WITH ACID.
It literally squeals in terror as he carefully demonstrates the power of his ‘dip’, making for one of the most painful and upsetting moments in a children’s movie ever. If that doesn’t epitomise dark Disney, I don’t know what does. Mind you, this was the same movie that created Jessica Rabbit, so who knows if Roger was truly meant for kids!
Honourable mentions:
Tell us Disney fans; what dark Disney story scarred you as a kid? Or indeed, as an adult! Let us know in the comments below.