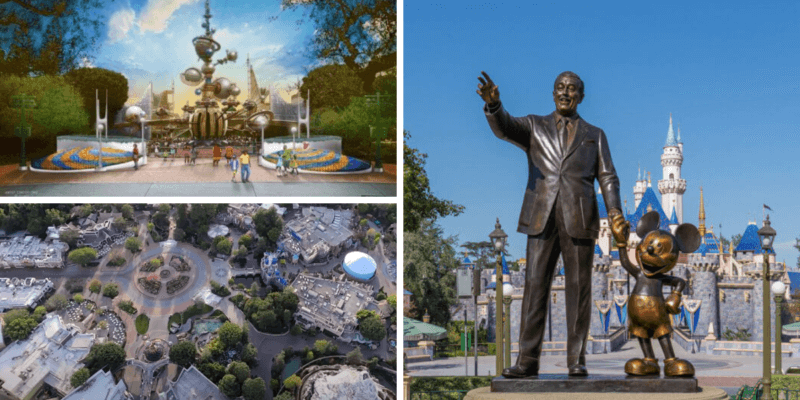 Disneyland Resort has been closed since mid-March, with the Disneyland and Disney California Adventure theme parks not operating for a majority of 2020. Despite layoffs, furloughs, and new health and safety guidelines, there are several projects that have moved forward at Disneyland Park, even though the Happiest Place on Earth isn’t welcoming any Guests right now. One of those projects is the renovation of the Disneyland Hub.

The Disneyland Hub is the centerpiece of the theme park, the location from which a Guest can access many of the park’s unique lands. The Hub (which got its name from the hub-and-spoke model that Disneyland’s layout follows) is located at the end of Main Street, U.S.A., with Sleeping Beauty Castle as its backdrop.

From left to right, the Hub provides the path to Adventureland, Frontierland, Fantasyland, and Tomorrowland, with Main Street completing the circle. In the center of the Hub is the Partners statue, the iconic dedication to Walt Disney and his pal Mickey Mouse, who welcome Guests to Disneyland every day when the park is open.

Several projects have taken place in the Hub to make it that much more enjoyable for Disneyland Park Guests when they are able to return to Walt Disney’s original Magic Kingdom once again. Here, we outline the work that has taken place and what you can expect for your next visit.

One noticeable change that Guests will take in when they visit Disneyland again is the restoration of the Partners statue, which will surely catch your eye as soon as you make your way to the Hub.

Disney shared in late 2020 that the centerpiece of the Hub, the Partners statue, had undergone a beautiful refurbishment. Disney unveiled the surprise to commemorate Mickey Mouse’s birthday. The company announced that the Partners statue was “restored to its original grandeur.”

Here’s what Disney Parks Blog says of the improvement:

The beloved Partners statue, created by famed Disney sculptor Blaine Gibson, features Walt Disney and Mickey Mouse. The photo above was taken at its original unveiling on Nov. 18, 1993, at the hub in Disneyland park to commemorate Mickey’s 65th birthday.

Over time, the bronze had oxidized, and because of the applied patina, acrylic polymer and wax, it required a more intensive process than just a simple cleaning or polishing. Over four days, an artisan utilized a process using crushed walnut shells to gently strip the figure down to the bare bronze. After cleaning, various chemicals were applied and heated with a blowtorch to create a reaction and fuse with the bronze. The figure was coated in a polymer to protect the patina, then coated with a very thin layer of wax.

While the refurbished Partners statue is certainly noticeable, the work that has been done on the Tomorrowland entrance is definitely mesmerizing.

Just over a year ago in November 2019, Disney announced plans to completely reimagine the entrance to Tomorrowland. The reimagining was said to include the removal of the “french fry rocks” in the front of the land to provide for a more spacious walkway (and, in turn, a cleaner look for the land).

Here’s what Disney originally shared of the Tomorrowland entrance refurbishment:

Imagineers wanted to open up the space and improve access into the land. However, it was important to maintain its overall complexion—with trees and beautiful planters. As shown in this rendering, guests will soon be entering Tomorrowland on a widened pathway lined with elliptical planters that are filled with swirls of colorful flowers.

This project is part of the ongoing “Project Stardust,” a series of renovations that were planned in an effort to improve the Guest experience at Disneyland Resort. Widened pathways are part of the project, and while those were certainly great changes for the theme park, they will most definitely be necessary as Disneyland Resort adapts to the current pandemic and implements new health and safety protocol with Cast Members and Guests in mind.

Another project was also announced as part of “Project Stardust,” and, like the Tomorrowland entrance refurb, this will also help with Guest flow and crowd control during the pandemic. In Spring 2020, amid the ongoing temporary closure of Disneyland Resort, plans to renovate the Frontierland entrance were unveiled.

A building permit filed with the city of Anaheim before the coronavirus closure of the park calls for the replacement of a pair of 15-foot-tall faux wooden gates and a 16-foot-long marquee along with the widening of an existing bridge at the Frontierland entrance, according to public records.

Finally, as the OC Register reports, work has been done on an area of the Hub where Disneyland theme park parades typically run: “Crews have finished renovating the brick apron between Sleeping Beauty Castle and Matterhorn Bobsleds near the Disneyland hub.”

This is likely the most minor of all the renovations that have taken place in the Hub, and it won’t be very noticeable to Guests, but it is worth mentioning.

Disneyland Resort has slowly but surely updated fans about the ongoing construction projects at the theme parks. Snow White’s Scary Adventures, for example, has been refurbished and renamed to Snow White’s Enchanted Wish, and that is one project that Disney asserts will be ready for Guests as soon as Disneyland reopens to the public. We’re excited to experience Disneyland and Disney California Adventure as soon as they are able to open and welcome Guests back to the magic.

“Disneyland will never be completed, as long as there is imagination left in the world.” —Walt Elias Disney