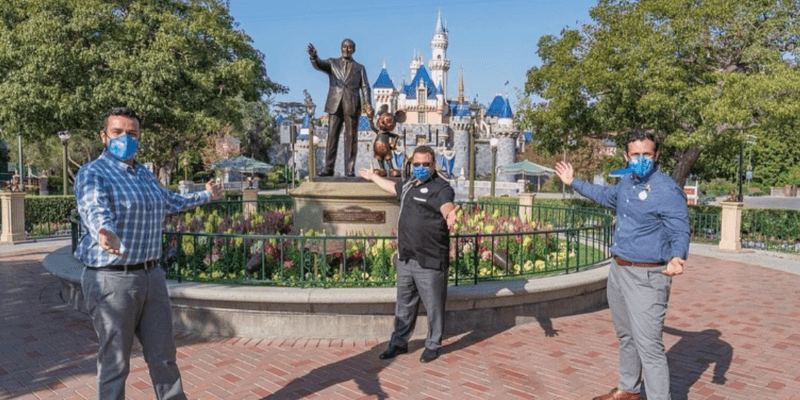 Today, everyone across the globe is celebrating the birthdays of both Mickey and Minnie Mouse — The iconic duo that we all know and love.

The iconic Partners statue at Disneyland park, featuring Mickey Mouse and Walt Disney, recently went under a refurbishment. Now, Disney just announced that for Mickey’s birthday, the statue has been restored to its original grandeur!

To commemorate Mickey Mouse’s birthday, we are excited to reveal a special surprise at the Disneyland Resort. Following a refurbishment, the iconic Partners statue in front of Sleeping Beauty Castle in Disneyland park has been restored to its original grandeur!

The beloved Partners statue, created by famed Disney sculptor Blaine Gibson, features Walt Disney and Mickey Mouse. The photo above was taken at its original unveiling on Nov. 18, 1993, at the hub in Disneyland park to commemorate Mickey’s 65th birthday.

Over time, the bronze had oxidized, and because of the applied patina, acrylic polymer and wax, it required a more intensive process than just a simple cleaning or polishing. Over four days, an artisan utilized a process using crushed walnut shells to gently strip the figure down to the bare bronze. After cleaning, various chemicals were applied and heated with a blowtorch to create a reaction and fuse with the bronze. The figure was coated in a polymer to protect the patina, then coated with a very thin layer of wax.

But that’s not all because the Storytellers statue at Disney California Adventure has also been restored! Guests will be able to see this statue in person for the first time since March beginning tomorrow, November 19, as Buena Vista Street will reopen as an extension to the Downtown Disney District.

Guests visiting the Downtown Disney District’s extension into Buena Vista Street will have an opportunity to see the Storytellers statue, which has also been restored. This statue features a 1920s-era Walt in a fedora and traveling attire­ — just off the train from Missouri and ready to realize his dreams with his pal, Mickey.

Disneyland Ambassador on Instagram also shared these fun photos along with the caption:

92 years ago, Walt Disney brought us the mouse that started it all! Today we celebrate the birthday of Mickey Mouse and Minnie Mouse. The “Partners” statue in Disneyland and “Storytellers” statue at Disney California Adventure both pay homage to our good pal, Mickey and Walt Disney who came to California with little more than a suitcase and a dream. That dream continues to grow and bring happiness around the world. These inspiring statues never looked better than they did on a walk in the park with Disneyland Resort President @KenPotrock the other day. To learn more about these incredible statues, make sure to visit the @DisneyParksBlog.

Wishing our beloved pals Mickey and Minnie Mouse a very HAPPY BIRTHDAY! To celebrate this special day, I stopped by the iconic Partners statue with the @DisneylandAmbassador team, Justin and Rafa. The Partners statue was originally unveiled in Disneyland Park on Nov. 18, 1993, in honor of Mickey’s 65th birthday. It is aptly located in the heart of Disneyland Park and symbolizes the unique partnership between Walt Disney and Mickey. We recently had the opportunity to revitalize the Partners and Storytellers statues – and they both look absolutely amazing! We’re excited to share a first look with you today.

It is important to keep in mind that the opening of Buena Vista Street in Disney California Adventure is an “expansion” of the Downtown Disney District. Due to the current state guidelines, larger theme parks, such as Disneyland and Universal Studios Hollywood, cannot resume operations until the state hits Tier 4 (Yellow/Minimal). You can read more about the state guidelines here.

Are you loving this special announcement? Let us know in the comments below.

Comments Off on Disneyland Announces Special Surprise in Honor of Mickey’s Birthday!