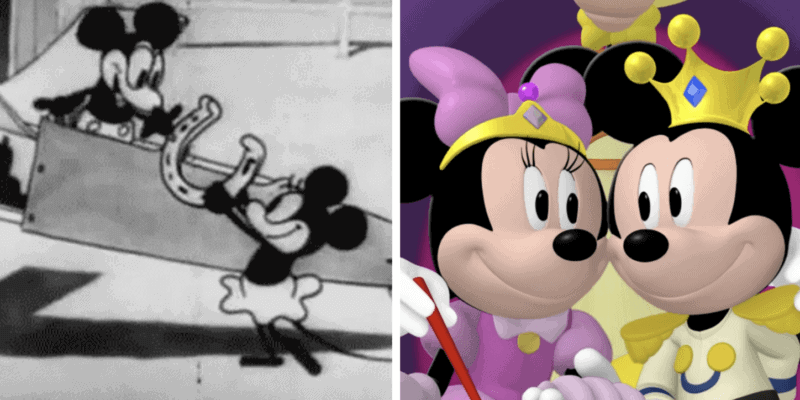 92 years ago today, Mickey Mouse and Minnie Mouse were “born”!

Prior to their official debut in Steamboat Willie, Walt had included Mickey and Minnie in Plane Crazy — this was, however, distributed after Steamboat Willie’s premiere.

Walt Disney voiced Mickey Mouse for many years — and many believe the iconic cartoon mouse was Walt’s alter-ego, of sorts. Several years ago, the Walt Disney Family Museum shared a touching excerpt from Walt’s 1948 essay, “What Mickey Means to Me”:

“He popped out of my mind onto a drawing pad 20 years ago on a train ride from Manhattan to Hollywood at a time when the business fortunes of my brother Roy and myself were at lowest ebb, and disaster seemed right around the corner,” Walt penned in a 1948 essay titled “What Mickey Means to Me.” The disaster Walt mentioned was the brazen theft of both his successful cartoon character Oswald the Lucky Rabbit, as well as most of the Disney artists, at the hands of Universal distributor Charles Mintz. As for who popped out of Walt’s mind? Why, that was Mickey Mouse!”

Through the years, Mickey Mouse and Minnie Mouse have gone through numerous iterations, from the hand-drawn animation of the 1920s to the 3D computer graphics of today, but they’ve never lost their magic!

Two years ago, when Mickey celebrated his milestone 90th birthday with a Disney Parks celebration that took the cake — literally! — YouTube channel Dave Lee Down Under created a video explaining the evolution of Mickey Mouse through the decades.

This is a fun 10-minute show for any Disney history fan (and for anyone who just loves the Mouse himself!)

Today, Disney fans all over the world say “Thank you!” to Walt Disney for creating Mickey Mouse and Minnie Mouse.

These characters have brought joy to millions of people around the globe — and continue to do so, perhaps now more than ever amid the struggles that have occurred throughout 2020.

There’s no better time to take a few minutes to watch a Mickey Mouse cartoon and forget your cares for just a little while.

“It all started with a mouse.”

Happy 92nd birthday, Mickey and Minnie! Thanks for all the memories (so far) — next up for the hardworking mice, a new Disney Jr. show premiering in January.

Comments Off on Happy Birthday, Mickey and Minnie – 92 Years of Memories!