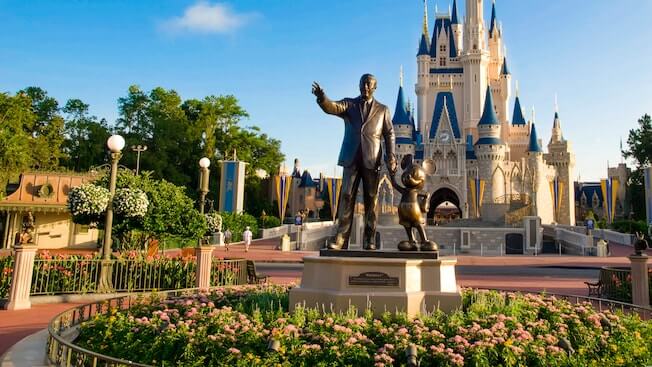 If you have ever been to the Magic Kingdom at the Walt Disney World Resort, you definitely have seen that Mickey Mouse and Walt Disney Partners Statue that sits at the end on Main Street, U.S.A. right in front of Cinderella Castle. Heck, you probably have a photo with it!

Well, did you know that there is more to the statue than just a nice commemorative decoration in Disney Park? In the statue, Walt is actually talking to Mickey, and we are going to tell you what is being said between the two.

Gary Landrum of Walt Disney Imagineering took Travel + Leisure for a spin around Magic Kingdom, sharing hidden secrets and details about the park, and when he reached the Partners Statue, Landrum had a lot to say.

Disney Legend Blaine Gibson, who knew Walt really well, was the Imagineer that created the statue. In case you didn’t know, Blaine also sculpted many of the animatronics we know and love on the Jungle Cruise, Haunted Mansion, the Enchanted Tiki Room, and worked on countless Disney animation projects. Blaine felt that he knew what Walt would have to say to Mickey if the two were standing hand in hand in the same spot, so that is exactly what the sculpture emotes.

As Walt points down Main Street, Landrum explains that Walt is telling Mickey to look at two things:

So now, next time you find yourself at the Partners Statue in Magic Kingdom, take a moment to turn around and look down Main Street, U.S.A. and think about what Walt is saying to his favorite mouse!

If you want to watch Gary tour all of Magic Kingdom, take a look at the below video!

Do you have a photo in front of the Partner Statue on Main Street, U.S.A.?