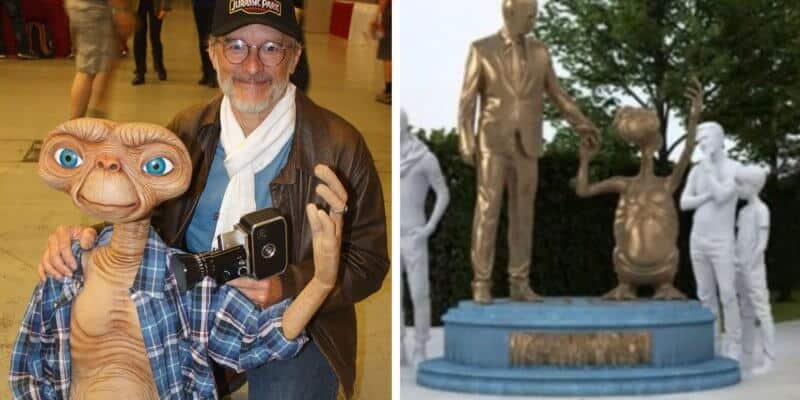 We all know that Disney World has the classic Walt Disney and Mickey Mouse Partner statue, but what about Universal Orlando? One fan has an idea for a new Partner statue across town from the mouse, and it may be the perfect solution to Universal’s lack of a creator/character statue.

Can we get a Spielberg/E.T. partners statue at USF tho?

Can we get a Spielberg/E.T. partners statue at USF tho?

Most recently we reported on a poll which was conducted stating that 33.3% of the Disney Parks fans who have voted that the Partners statue at Disney World should be replaced with George Lucas, Stan Lee, and John Lasseter holding hands. It seems that this topic of discussion sparked the thought of having a Partner statue in Universal for this Universal fan.

Released under Universal in 1982, E.T. the Extra-Terrestrial was directed by Steven Spielberg. The film which shot with a $10.5 million budget, “sold over 15 million VHS units in the United States, and grossed more than $250 million in video sales revenue. The VHS cassette was also rented over 6 million times during its first two weeks in 1988, a record that E.T. held up until the VHS release of Batman the following year. The 2012 release of E.T. on DVD and Blu-ray grossed $24.4 million in sales revenue as of 2017 in the United States. E.T. also generated more than $1 billion in merchandise sales, as of 1998.”, according to Wikipedia.

Universal Studios is also home to E.T. Adventure, a highly immersive dark ride attraction whose queue gives the Wizarding World of Harry Potter a run for its money — and it was made in 1990. According to the Universal website, E.T. Adventure’s storyline is as follows:

If you’ve ever seen the movie E.T. you’ve probably wished you could ride one of those flying bicycles across the sky. Now’s your chance and there’s no time to waste because E.T. needs your help. His home planet is dying and only you can help him save it.

Board your flying bike with E.T. in the front basket and take off on a thrilling (but gentle) ride through the sky. You’ll have to dodge bad guys trying to track him down. If you do, you’ll soar above the city and into the stars where his magical home awaits, filled with wondrous otherworldly creatures.

The attraction’s pre-show is even hosted by Spielberg himself, so it’s not surprising that when thinking of the perfect duo to pose like a statue for Universal Orlando, E.T. and Spielberg come to mind. Plus this is something that has (kind of) happened in the past!

They made a mock-up for one at the Carlo Rambaldi Experience Museum of E.T. with Rambaldi. Unfortunately I don’t think they ever built it

They made a mock-up for one at the Carlo Rambaldi Experience Museum of E.T. with Rambaldi. Unfortunately I don’t think they ever built it pic.twitter.com/inpbfweVA4

Although this version of a Partner statue never came to fruition at the Carlo Rambaldi Experience Museum of E.T., it shows that the thought of pairing the ultimate duo has been on the mind of many. Plus, Spielberg is responsible for an impressive list of Universal creations. According to Fandom, “he is well known for founding the company Amblin Entertainment which includes Jaws, the Indiana Jones franchise, E.T. the Extra-Terrestrial, Schindler’s List, Jurassic Park, Ready Player One, and the Warner Bros. animated series Tiny Toon Adventures. He also co-founded the studio DreamWorks (along with Jeffrey Katzenberg and David Geffen).

Although not all of these films are based in Universal parks — Indiana Jones is notably a Disney IP — many of the IP’s listed such as Jaws and Jurassic Park have been essential in crafting the world of the Universal theme parks. DreamWorks (Shrek, Minions) also is a newer addition to the parks showing that Spielberg is not only responsible for the creating, but also innovating — much like Walt Disney.

However, unlike Walt, Spielberg may have been a major player in the creation of Universal, but it was not his creation from inception. That being said, considering his contribution to the company, the idea of having a statue dedicated to Spielberg and E.T. is not a terrible idea in this reporter’s opinion!

What do you think? Should Universal put in a ‘Parter’ statue with Spielberg and E.T. holding hands like Walt and Mickey do on Main St. U.S.A.? Let us know your thoughts!