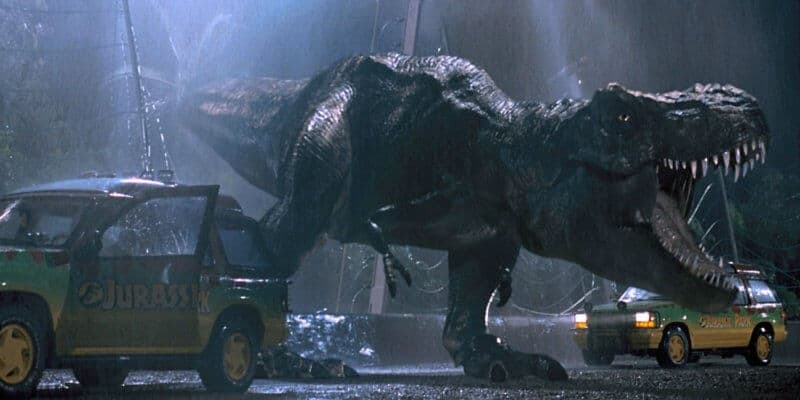 Jurassic World: Dominion has finally wrapped production and will be hitting theaters on June 10 next year. The sixth entry in the Jurassic Park series is one of the most highly-anticipated movies of 2022, which is no surprise considering the cliffhanger we got at the end of  Jurassic World: Fallen Kingdom.

The blockbuster franchise started in 1993, and despite a 14-year hiatus after the release of the third film, it was brought back to life in 2015. But is the Jurassic Park series actually any good? Before Jurassic World: Dominion hits theaters, let’s revisit the entire franchise! So here are all the Jurassic Park movies, ranked worst to best.

The 2018 sequel picks up three years after the events of Jurassic World, in which the dinosaur theme Park collapses after a genetic hybrid escapes its enclosure and wreaks havoc on the island. Now, a volcano threatens to wipe out the dinosaur population (pretty poor research on InGen’s part!), which leads to polarizing opinions around the world.

Meanwhile, previous Park manager Claire Dearing (Bryce Dallas Howard) and raptor trainer Owen Grady (Chris Pratt) lead a new team back to the island so that they can rescue as many dinosaurs as possible (sound familiar?). However, their financier and military escort have other plans – sell the dinosaurs at an illegal auction in a mansion on the mainland.

From volcano-driven dinosaur stampedes to creepy genetic hybrids stalking humans in a gothic mansion, Jurassic World: Fallen Kingdom is not without some huge thrills. But as a film of two halves (with a jarring central shift in both setting and tone), we can’t help but feel that there was a tug of war between the studio and director J. A. Bayona.

It’s easily the bleakest affair in the franchise too, and while we understand that the goal was always to bring the dinosaurs to the mainland, the film feels far too contrived to be clever. And not only are the characters’ motivations deeply vague, but they also appear to share the same goals as the villains from The Lost World: Jurassic Park!

Jurassic Park III is generally considered the worst movie in the franchise, and there’s really no surprise (although we clearly prefer it to Fallen Kingdom!). A troubled production got the film off to a bad start, and even without a script in place, the cameras started rolling. But has time improved this threequel, or does its off-screen problems still show?

Directed by Joe Johnston, Jurassic Park III picks up four years after The Lost World: Jurassic Park, and Site B – that’s the second island with dinosaurs (which doesn’t have a volcano yet) – has long been declared a ‘no-fly’ zone by the Costa Rican government. However, that doesn’t stop young Eric Kirby and his stepfather from going parasailing along its coast.

We then catch up with Dr. Grant (Sam Neill), who is approached by a couple requesting his services to be their guide on an aerial tour of Site B. But when they land their plane on the island, Grant learns the pair are Eric’s parents. While the plot is paper-thin, the film wastes no time in getting down to business – and its dinosaurs galore within minutes.

It’s fair to say that Jurassic Park III is a bit like one of the Jurassic Park-themed attractions at Universal Studios. From start to finish, it’s a rollercoaster ride that doesn’t let up (it’s also very short). With that said, it’s by no means problem-free, and its poor performance at the box office sent the franchise into extinction for what felt like 65 million years.

The direct sequel to Jurassic Park was the last film in the series to be directed by Steven Spielberg (though he would return as the producer for subsequent films). It’s also the last entry to be based on a novel, which like the original bestseller Jurassic Park was penned by the late Michael Crichton. However, just like the first book, there are huge differences.

This time, Ian Malcolm (Jeff Goldblum) returns as he leads a rescue mission to Site B, where his palaeontologist girlfriend Sarah Harding (Julianne Moore) has been sent by John Hammond to study dinosaurs, which the entrepreneur hopes will dissuade his company InGen from taking dinosaurs from the island for a San Diego-based Jurassic Park.

With Hammond ousted from the board, InGen shows up at the island with a team of game hunters, and soon they cross paths with Malcolm’s expedition. But when a pair of tyrannosaurus rexes avenge the maiming of their infant, both teams join forces and try to make it off the island in the same number of pieces they arrived in.

Like in the first film, there are lots of “oohs” and “aah’s”, and later a lot of “running and screaming” too. It’s a solid successor to the 1993 classic, even if it does suffer from an overuse of comedy – especially during a third act that should have been entirely nail-biting. Nevertheless, unlike any other sequel to follow, the atmosphere here is on point.

When Colin Trevorrow told us he was the ultimate Jurassic Park fan (that it was his answer to Star Wars growing up), we knew we were in great hands. And when Jurassic World finally hit theaters in summer 2015, following what was perhaps the biggest marketing campaign we had seen for a blockbuster movie for a long time, it definitely delivered.

For the first time since the original film, the long-awaited sequel takes us back to the original island, where the Masrani Corporation has built the ultimate dinosaur theme Park Resort – quite literally on top of the original one that collapsed all those decades ago! Now, to keep investors and Guests keen, a new hybrid dinosaur has been created.

Naturally, in true Jurassic Park style, things go awry when the ‘Indominus Rex‘ breaks free from its enclosure and wreaks havoc all over the Park. And operations manager Claire Dearing and raptor expert Owen Grady are the only ones who can stop the genetic abomination, with help from a pack of trained raptors and a T-Rex, of course!

Jurassic World is easily the strongest sequel so far, and even if it is a blatant love letter to the 1993 classic, it still manages to forge its own identity. While it’s definitely an outlandish sequel (the dinosaur fight at the end feels like a WWE match!), it’s an epic follow-up that saved the series from extinction (without the use of mosquitos).

You can accuse us of being predictable, but we’re convinced the top of your list is the same! While opinions are of course subjective, and there are probably many fans out there whose number one is different to ours, Jurassic Park is and always will be our favorite movie in the entire franchise, regardless of what Jurassic World: Dominion is like!

When three scientists are invited to give a new island theme Park Resort their seal of approval before it opens to the public, nothing could have prepared them for real-life dinosaurs. But when they put their wonder aside, Alan Grant, Ian Malcolm, and Ellie Sattler (Laura Dern) begin to question the morality of InGen’s genetic exploitation.

Beneath this artificial paradise, there are many flaws, but all it takes to bring Jurassic Park down is one disgruntled employee and a spot of industrial espionage. And when the power is out, so are the dinosaurs, and the Guests are pitted against some of the deadliest predators to have ever walked the earth.

Steven Spielberg’s Jurassic Park is a landmark film that changed cinema as we know it. Its prehistoric cast looks so convincing that we question whether dinosaurs were actually genetically engineered by Amblin Entertainment! But putting all the surface-level quality aside, this science-fiction adventure is nothing short of a thrilling masterpiece.

It’s still a while before we get to see Jurassic World: Dominion, so why not revisit all the Jurassic Park movies in the meantime? There’s also the animated show Jurassic World: Camp Cretaceous on Netflix, and two short movies in the form of Battle at Big Rock, and the five-minute preview that showed alongside Fast & Furious9 in IMAX earlier this year.

How would you rank the Jurassic Park movies?