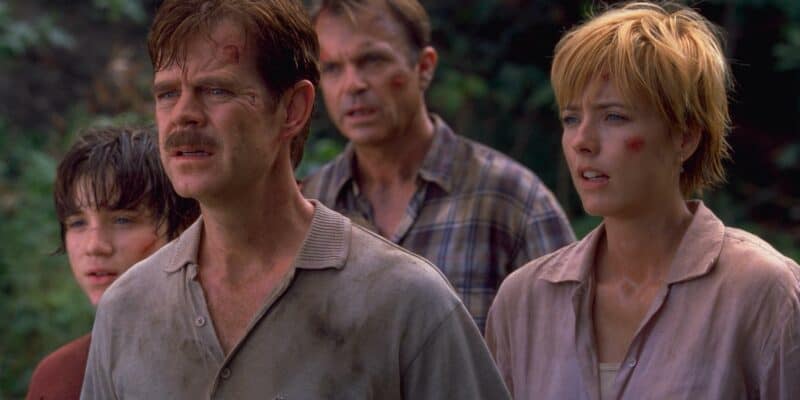 The original Jurassic Park is a thought-provoking science-fiction thriller that deals with the ethics of meddling with nature for personal and profitable gain. Its sequels, on the other hand, not so much. These themes are present throughout the franchise, but some of the entries still leave a lot to be desired where solid writing is concerned.

While 2018’s Jurassic World: Fallen Kingdom appears to be the least favored of the Jurassic Park series so far, Jurassic Park III is still recognized as the one that has the most problems. A deeply troubled production saw the film start shooting without a script, which might explain why there are some things that make absolutely no sense!

So, let’s do some digging and find out what they are!

The movie starts with young Eric Kirby (Trevor Morgan) parasailing with his stepfather Ben Hildebrand (Mark Harelik) near Isla Sorna. However, since the events of The Lost World: Jurassic Park, the island has been declared a ‘no-fly’ zone. But when the pair become shrouded in thick fog, they lose sight of the boat and its crew below.

When the fog clears, the boatmen are nowhere to be seen, and all that remains is a lot of blood on deck! Just as the boat is about to hit some rocks, Eric and Ben manage to free themselves from the tether and drift towards Isla Sorna. While it’s clear that a dinosaur is to blame, the deaths of the boatmen are still puzzling because no explanation is offered.

And the fact that there isn’t any build-up reminds us of that non-existent script. The likely answer, though, is that it’s the spinosaurus, which can indeed swim, as seen in the film’s third act. Eric also later mentions that the bigger dinosaurs live near the coast. Either way, can we please get the Jurassic Park III ‘Whodunnit Cut’, just to be sure?!

The most obvious inconsistency with 2001’s Jurassic Park III is the island itself. In the film, the jungle is depicted as lush, grungy, and dense. In the 1997 sequel The Lost World: Jurassic Park, however, it’s far more open, with towering trees that give the impression its human inhabitants are like insects, unlike the claustrophobic nature of the third film.

But this was no accident. In one of Jurassic Park III’s behind-the-scenes documentaries, it’s revealed that the filmmakers wanted to go for something that was more “lush”, “grungy” and “primordial”. While Jurassic Park III was partially filmed in Hawaii, The Lost World’s jungle scenes were actually filmed in California’s Redwood State Park.

There are other inconsistencies along these lines too. As they make for the coast, Eric says to Alan Grant (Sam Neill), “the closer you get to the water, the bigger things get”, despite the fact that in the previous movie it’s established that the carnivores are more common in the island’s interior. It feels like the Star Wars sequel trilogy all over again!

After discovering the body of Ben Hildebrand, Amanda Kirby (Tea Leoni) and ex-husband Paul Kirby (William H Macy) discover a raptor nest in the jungle. The team wisely decides to not hang around and pushes forward with their journey, but Billy Brennan (Alessandro Nivola) falls behind, and is later seen suspiciously adjusting his backpack!

When the team learns that they’re being hunted by raptors, it’s revealed that Billy stole some of the eggs with the intention of selling them on the black market. We’re no dinosaur experts, but we’re pretty sure the highly-intelligent raptors wouldn’t leave their nests in plain sight, with not a single pack member around to stand guard!

If the raptors didn’t care about their young, it would make more sense, but the fact that the entire pack gives chase to the humans only reinforces just how little this makes sense. We get that the filmmakers needed a way for Billy to steal these eggs in the first place, but perhaps those super-smart raptors could have come up with some better writing!

Our heroes can’t seem to catch a break in this movie, because no sooner after Eric is finally reunited with his parents, the team is reunited with the spinosaurus, whose arrival is heralded by that annoyingly infectious satellite phone jingle! Of course, the dinosaur isn’t interested in a teary-eyed hug, so it chases Eric and Alan along a large, reinforced fence.

Fortunately, the two are able to escape through a small opening and join the others to catch their breath on the safer side of the fence. But moments later, the spinosaurus obliterates the metal structure! The humans quickly take shelter inside an abandoned building, whose wooden door is miraculously impenetrable to the powerful dinosaur!

But that’s not the only problem with this scene – it’s the fact the spinosaurus is able to smash through the fence in the first place. While of course, the power has long been out, with InGen having abandoned Site B several years ago, it’s unclear as to how this dinosaur is able to shatter something that was previously designed to keep it in!

When our characters accidentally stumble into a giant aviary, which of course houses flying prehistoric reptiles, they end up having to fight a family of pteranodons – and their nest of equally-dangerous young too. And there appears to be no way out – the aviary is a giant dome-like structure that fills the gaps between two opposing cliff walls.

Eventually, the others – Alan, Paul, Amanda, and Eric – find a way out of the giant birdcage. After swimming beneath the barrier, they discover a small gate and manage to make it to the other side, leaving the pteranodons right where they found them. However, Amanda forgets to pull the gate behind her (these people are terrible!).

At the end of the film, we see the now-free adult pteranodons flying off into the sunset (the dinosaurs on this island really don’t care about their young all that much). The problem with this scene is that flying prehistoric reptiles were already loose on this island – there’s one in the final frame of the film’s predecessor The Lost World: Jurassic Park!

During the sequence with the pteranodons, after using a recovered parachute to rescue Eric from a nest, Billy is attacked in the air and ends up falling into the river, where two pteranodons follow him. It’s pretty obvious that these giant birds are actually killing him – we even see them dragging him downstream.

When the film’s troubled production became common knowledge, it was revealed that the actor who plays Billy wasn’t happy with being killed off, and ended up persuading director Joe Johnston to keep him in the movie (probably in the hope of being used in a future installment). As such, Billy survives the pteranodon attack, despite the fact he clearly dies in that scene!

But this isn’t the only baffling part about this entire sequence. Billy is seen being dragged off down the river by two pteranodons and is later recovered by the Navy and the Marines off-screen. So does this suggest that there was always a way out of the aviary, and the pteranodons just happened not to notice all these years?!

We’ve already established that we’re not dinosaur experts, although we do know that Jurassic Park III’s biggest (and literal) plot device was created entirely for the purpose of the film. In other words, the velociraptors’ ‘resonating chamber’ simply does not exist in real life (at least not how it’s portrayed in the film).

But that’s not our problem with it, as we’re always happy to suspend our disbelief. After all, this is a film filled with genetically-engineered prehistoric animals of all things. Nevertheless, Alan and Billy print a 3D version of the resonating chamber and end up taking it with them on their journey to Isla Sorna. So it all makes enough sense so far.

What doesn’t make sense, though, is how Alan is able to use it when they’re finally confronted by the raptors at the end. While he’s simply trying his luck with the chamber, the fact that Paul ‘corrects’ him by saying, “No, call for help,” is what really gets our eyes rolling. This character’s sudden expert knowledge of raptor communication is nothing short of baffling.

Ultimately, despite these problems, Jurassic Park III is still a really entertaining movie, and is hardly the only film in the franchise that’s plagued with mystifying storytelling elements! And while it remains the most problematic of the bunch, it’s a title that a future Jurassic Park movie may be yet to snatch!

Jurassic World: Dominion is out in theaters on June 10, 2022, which is the sixth film in the overall series and the third Jurassic World entry.

Did you notice anything in Jurassic Park III that didn’t make any sense?